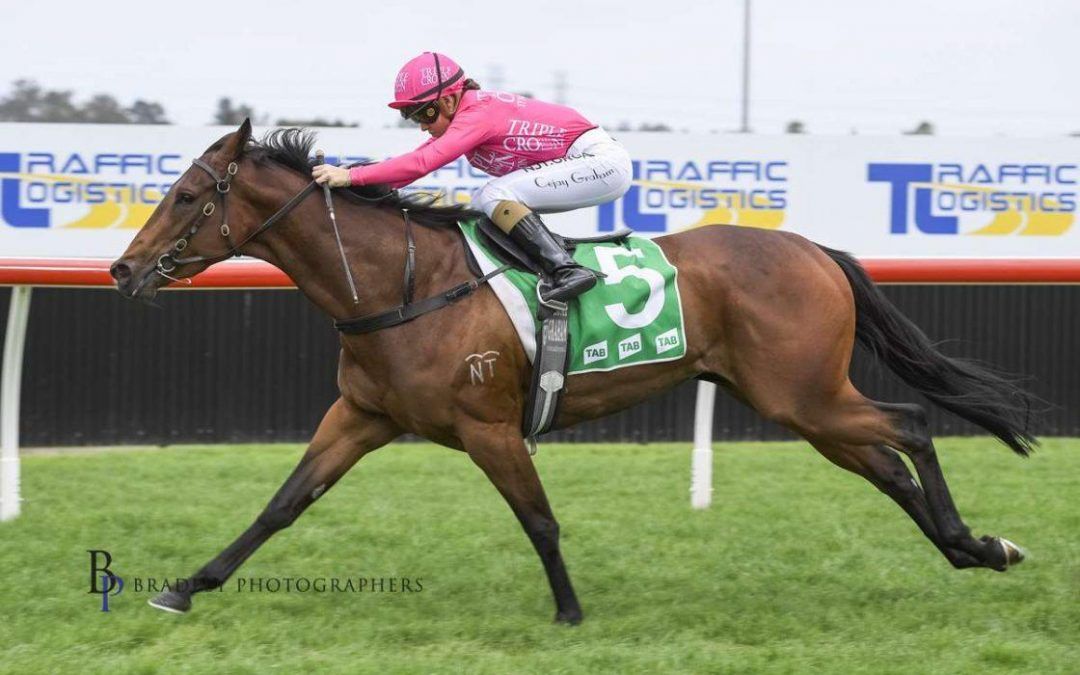 Triple Crown’s exciting filly Military Magic maintained her unbeaten record with the minimum of fuss at Kembla Grange on Saturday, taking out a Class 1 contest over 1200 metres in impressive fashion.

The daughter of Epaulette broke alertly under Cejay Graham and showed excellent gate speed to lead the field through the opening 100 metres. Cejay then settled Military Magic in third, sticking to the rail throughout as the gargantuan Soir De Lune took the field along at a good clip.

Granted a dream run up the rail as they turned for home, Military Magic showed a smart turn of foot to surge to the front at the 300 metre mark, before defying a bit of greenness close home to score by an authoritative length and a half.

The victory saw Military Magic continue her upward trajectory, having broken her maiden over the same course and distance just three weeks ago.

“She was such a professional out there and she’s obviously stepped up from that debut win,” Cejay said in her post-race debrief.

“She began well, put herself there and travelled like the winner. I was presented with such a good run and she just pinned her ears back. She did it with ease.”

Co-trainer Peter Snowden was also taken with the performance and was quick to praise the winning jockey.

“It’s not very often you see horses go from winning a Maiden to winning a Class 1, so that’s a great result,” he said.

“Cejay rode her terrific and she has that really good gate speed that takes all the bad luck out. As a $1.60 favourite you don’t want to be held back getting strung up behind horses, and Cejay showed great initiative to move forward and get a nice spot. She’s not very big, but she has a big ticker and hopefully that will take her a long way in her racing.”

Military Magic was well-supported to maintain her perfect start, with her place in the market owing a lot to the form of her maiden victory on October 26. The runner-up, third and sixth from that contest have all won subsequently, while the fourth and fifth have both been placed on their next outings.