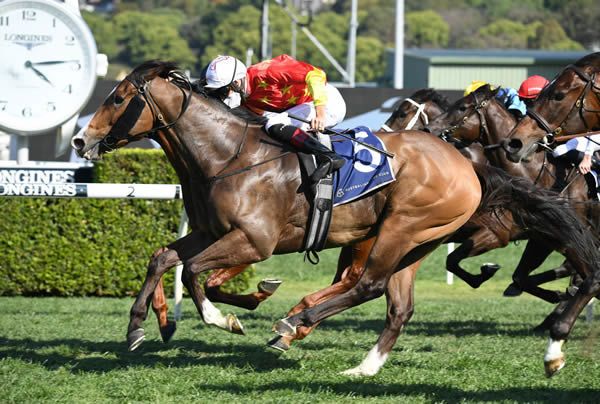 Enjoying his first victory since January’s $2 million Magic Millions 3YO Guineas at the Gold Coast, the now four-year-old son of Star Witness got the job done in a photo as a 30/1 outsider in the $500,000 Silver Eagle (1300m) at Randwick.

The race was marred by the breaking down of the front-running Triple Ace at the top of the straight, which caused a number of horses to lose positions including the beaten favourite Vangelic who had been well positioned in third before things went amiss.

Jockey Hugh Bowman stayed out of trouble on the eventual winner however taking Aim right up the middle of the track after getting the gap on the straight.

He drove through and held on to finish just a half-head over last start Rosehill winner Ellsberg with Real Impact gelding Count De Rupee a nice third.

“Obviously there was a lot of commotion at a vital part of the race there but thankfully everyone was able to avert that commotion and stay on their feet which is pleasing,” Snowden said post-win.

“He has prepped up lovely this horse, he looked good in the skin. 1300m first up was always going to be an ask for him but Hugh rode him outstandingly. He is one of those horses that you have to wait for the right conditions. He is no good on soft ground. We saw what he did in the Magic Millions three-year-old last year, he just blew them away. When he can get those conditions on the day he is certainly right up there with anything that he races against.”