Ranges hits the target for his first metro win 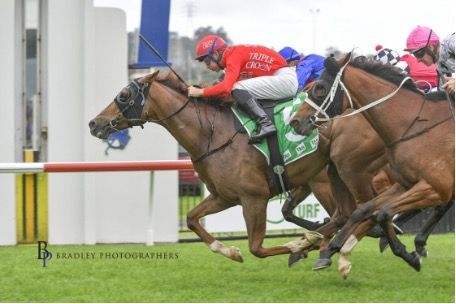 Ultra-consistent five-year-old RANGES got his preparation off to the best possible start at Kembla Grange on Saturday with a hard-fought victory under Tommy Berry.

On what was his first start since July, Ranges was forced to do it the hard way from barrier 10 and had to overcome a three-wide passage throughout, making his gutsy win in a class record time all the more impressive. The son of Shooting To Win also came into Saturday’s contest with only one trial under his belt, but Peter & Paul Snowden had him forward enough to score a richly deserved metropolitan success, with the prospect of plenty more to come.

“It was a tough run, he didn’t get a lot of luck from the barriers,” said Tommy Berry in his post-race debrief. “I just kept a good hold of him as I was aware he would be needing the run, but I just loved how tough he was out there today. He had a good blow and he has plenty of improvement (to come).”

Winning co-trainer Peter Snowden was quick to heap praise on Ranges, who is rapidly making a name for himself as one of the most progressive and consistent horses in the stable. “How good was that!?” he said. “I was so proud of him to see him do what he did off one trial. One trial, a soft track and the hardest run he could have possibly had – he was three deep with no cover the whole way – which added more merit to his win. Although the margin was only small, the effort was huge. He can definitely improve off that. His benchmark is creeping up and nearing Saturday class all the time, but judging on what we saw there he’s going to be up to the challenge. It was a good effort and they ran very good time in a class record.”

Snowden also concurred with Tommy Berry’s sentiments that there is more to come from Ranges as we get deeper into his preparation.

“Off a tough run first-up there is definitely improvement in him, he’s still carrying a bit of belly so I’m pretty confident that we are in for a good preparation this time through,” he said.

Ranges bagged his terrific ownership group an additional $60,000 in prizemoney for his troubles, taking his total career prizemoney beyond the $200,000 mark.

It was great to see him return to action with his customary grit and hopefully he can continue on his winning way next start!