Tribute To Our Pride And Joy 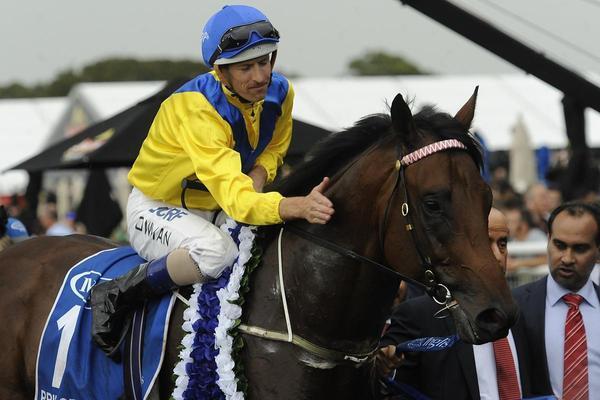 It’s with great sadness that the racing career of Group 1 juvenile star Pride Of Dubai, came to a close on February 8 after he suffered bone bruising in the Group 3 Eskimo Prince at Randwick on February 6.

Unfortunately it was the same injury which sidelined the elite colt for 10 months after a scintillating win in the 2015 Group 1 Inglis Sires Produce, so read on as we take a look back on his wonderful achievements.

In 2014 Peter and Paul Snowden were given a golden opportunity by Sheikh Mohammed bin Khalifa Al Maktoum to pick five horses out of the paddock to train and after looking at 15, Pride Of Dubai was their number one pick, as Peter Snowden reflected.

“He was our top pick out of the paddock. He had a good demeanour, a good eye and a broad head which are things I like.

“He was pretty raw and had a frame to fill in to but knowing a bit about Street Cry’s I had to be forgiving and imagine what he’d grow in to.

“His first race run was terrific and he was a certainty beaten in the Prelude but thrived from that run. There were plenty of top jockeys chasing the ride including Damien Oliver heading into the Diamond, so that gave us even more confidence to win Sheikh Khalifa his first Group 1 race in Australia.

“I wasn’t surprised he won the Blue Diamond because I thought he was good enough but credit must be also given to Damian Browne who rode him admirably.”

Team Snowden decided to bypass the Golden Slipper, a race they won with Sepoy after his Diamond victory in 2011, due to the three week turnaround between races and the hectic style of race it is, opting to extend the colt and his potential to the seven furlongs.

“Logic was to go on to the Slipper but because he was getting back in his races, I didn’t want him hustled early to keep in touch and risk taking off his explosive finish, plus I also felt three weeks from the Diamond to the Slipper was a bit short, so I opted for the five weeks between runs and seven furlongs of the Sires Produce and it paid off,” explained Snowden.

“He drew wide, race wide without cover and Hughie had to make a couple of runs in the race but he was still good enough to win going away, so from my perspective it was a courageous effort.”

Champion jockey Hugh Bowman, who partnered Pride Of Dubai in four of his five race starts, was in complete awe of what he achieved as a racehorse too.

“For him to improve at the pace that he did to the level that he did was very unique. To win the Diamond and the Sires with such limited experience was an extraordinary effort,” said Bowman.

“I was supremely confident in the race [Sires Produce], but felt we were going to see a better colt at three years old.

“He was a very mature horse physically but just the way he covered the ground – he had power and he had speed,” added Bowman.

“When he quickened up in the Sires you didn’t feel his stride quicken, it just lengthened and that’s always a sign of a good horse,” added Bowman.

Losing such an elite horse for any stable is tough, but Pride Of Dubai leaves the care of Snowden Racing in fine fettle for his next big assignment, stud studies at Coolmore.

“He’s a trainer’s dream. His biggest attribute was his demeanour, he was great to handle, and anyone could ride him, he just had a super attitude,” said Snowden.

“It’s a big loss for us but we now look forward to one day training his progeny and I think he’ll be popular with breeders in both hemispheres because he’s got a great pedigree, and an international flavour about him.”