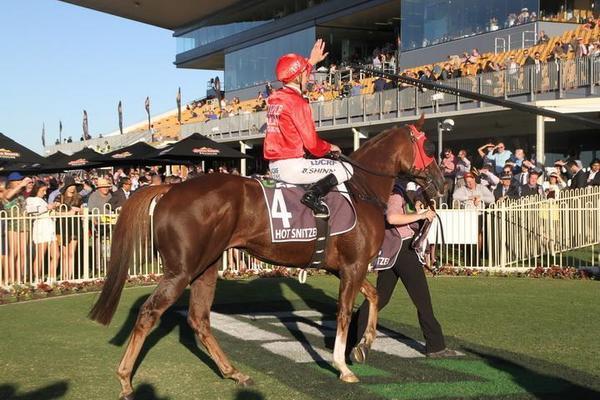 It’s not often a horse will live up to their potential but that’s exactly what Hot Snitzel did for his legion of Triple Crownowners and racing fans so Friday 12 February was an extremely sad day to announce the retirement of Hot Snitzel following the discovery of the early stages of a tear in his near-fore suspensory ligament.

With eight career wins, six seconds and three thirds, this Group 1 warrior has been consistently in the money for a long period of time; and his $1,343,850 in career prizemoney says it all.

The seven-year-old gelding raced over five successful years at Group or Listed level (with exception to his winning debut at Rosehill and his second race run in the Inglis Nursery) highlighted by his 2015 BTC Cup Win with Blake Shinn in the saddle.

“This is a feat not many racehorse achieve, and while we only had Hot Snitzel from March 2015, he was an absolute pleasure to train.

“It’s always hard losing a horse of the calibre and it should not be underestimated how much they can lift a stable, and the spirits of connections, strappers, trainers and jockeys; he will be genuinely missed by everyone at Snowden Racing,” said Peter Snowden.

His final run came in the 2015 Group 2 tab.com.au stakes race at Flemington on Victoria Derby Day where despite finishing a close second to Eclair Choice ahead of Triple Crown-owned stablemate Dothraki, he beat subsequent Group 1 VRC Darley Classic winner Delectation.

Triple Crown’s Michael Ward also paid tribute to their flagship horse via a statement on theirwebsite.

“Hot Snitzel is one of those rare racehorses which delivered Group race success in all five years which he raced, from running in the Group 1 Golden Slipper as a two-year-old, to winning the Group 1 BTC Cup as a six year old last winter.

“It’s been an extremely sad decision to retire Hot Snitzel but he deserves every day of his retirement and we look forward to keeping up to date with the next stage of his life.”

We wish Hot Snitzel a well-deserved healthy and happy retirement, and thank him for his exceptional achievements on the track.