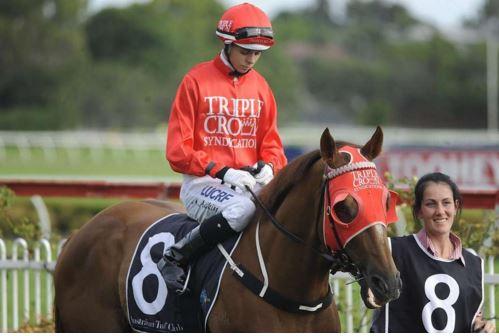 It wasn’t the easiest of runs, but race-favourite El Sasso hit the mark by saluting in the $50,000 Motorama QTIS One Metro Win Handicap (1200m) for Triple Crown connections at Doomben on April 2.

The speedy five-year-old son by Snitzel out of Sassy Peg appreciated the drop in weight to 57kg and went one better after running a luckless second to Beatniks in a benchmark 85 handicap carrying 58.5kg at Doomben two weeks prior.

Fresh off his Group 1 win aboard Buffering at the Dubai World Cup meeting, El Sasso was partnered by leading Queensland-based jockey Damian Browne who guided him to victory after a torrid run sitting five and four wide; however El Sasso dug deep and worked his way to the front to reel in Cashing Up in the final 50 metres by 0.2 of a length.

“Not much went right for us in the run, but when you are riding their [Snowden] horses you just have so much confidence because you know they are always going to be spot on,” said Browne to the Courier Mail.

While not there in person, co-trainer Paul Snowden watched from afar at Randwick and was absolutely thrilled with the result, which brings El Sasso’s career record to five wins, seven seconds, and four thirds from 29 starts with total earnings over $211,000.

“It was a terrific victory, and a really gutsy effort considering he had no luck in running– he’s so honest.

“He’s a 1200 specialist and we’re just glad that we can keep placing this horse in races he can win,” said Paul Snowden.