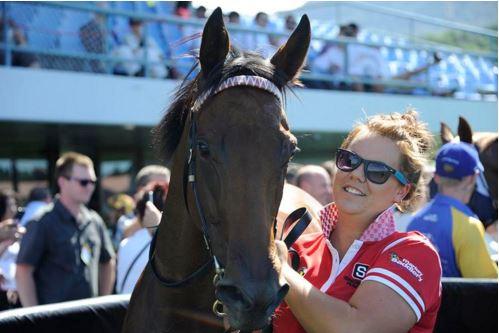 Talented filly Missile Coda did everything wrong in her first career start on Saturday but prevailed in stunning fashion to win the opening race for two-year-olds over 1000 metres at Kembla Grange.

Ridden by Mitchell Bell, the race-favourite missed the start then experienced a hampered run in the home straight when trying to gain a clear passage at the 300 metre mark.

Those testing circumstances however didn’t stop the filly showing an explosive turn of foot with a barnstorming finish in the final 100 to nail Samadoubt by a half neck on the line.

Owned by Debbie Kepitis’ Woppit Bloodstock, the promising daughter of Smart Missile provided her sire with his first Australian winner, and looks to be a real talent in the making.

“Everything went wrong in the race but she showed a real desire to win – that last 100 metres was impressive.

“You expect a two-year-old at their first race start to make a few mistakes but the way she picked herself up at the 300 and charged towards the line was unbelievable,” said co-trainer Paul Snowden.

“She’s shown us at home that she’s got above average ability but they still have to do it on raceday and it was a big effort today.”

By Smart Missile out of Rain Melody – a three quarter sister to the dam of multiple Group 2 winner and multiple Group 1 placed Rain Affair, Missile Coda was secured for $400,000 out of the Amarina Farm draft at the 2015 Magic Millions Gold Coast Yearling sale.