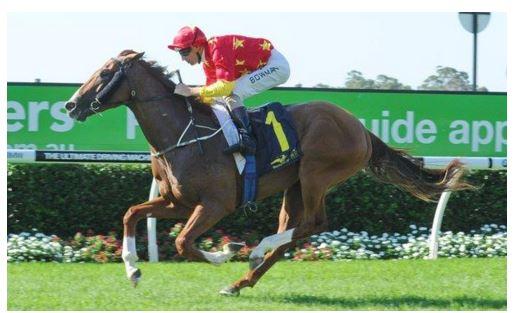 Impressive two-year-old colt Taj Mahal may have been last out the gates, but was first past the post in the $40,000 TAB More Than Just Winning Handicap (1300m) at Warwick Farm on April 6.

Racing in the red and yellow China Horse Club colours for connections which also include Horse ventures, Newgate Farm, Stonestreet Stables, Kia Ora, Winstar and Mr S P Mistry, Taj Mahal was ridden for luck and saved significant ground along the inside rail under the expert guidance of champion jockey Hugh Bowman.

At the 150 metre mark the promising More Than Ready juvenile burst clear to record a dominant length victory ahead of Peacock.

“He won really well and it was a great ride by Hugh to save ground like that,” said co-trainer Paul Snowden.

“I’m not sure what we’ll do with him now, whether we punch on for one more here or give him a breather and head to the Queensland Carnival – we’ll discuss all options once we get home.

“He is learning more with every start and there is a really good race win in stall for him.”

Carrying the same colours in the race was stablemate Argentina, who made an eye catching run to finish fourth.

“He didn’t have the easiest of runs but picked himself up like a good colt does and hit the line well – he’s also capable of a landing a very good race win,” added Snowden.

Taj Mahal has accumulated a win, a second and a third from four starts for $47,125 in prizemoney.