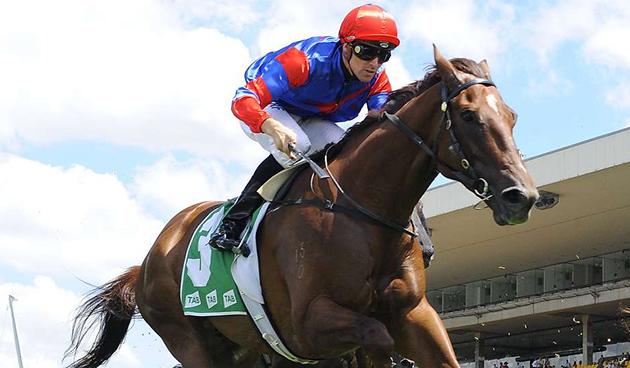 In one of the most exciting finishes in Scone Cup history, Pajaro prevailed in the Listed $200,000 Emirates Park Scone Cup (1600m) on May 13.

Jumping from the outside gate, the Greg and Donna Kolivos-owned five-year-old gelding was ridden for luck by Tim Clark who replaced original rider Winona Costin, due to her falling ill on the day.

After settling back in the field early, Clark expertly picked off runs throughout the journey before running into numerous dead-ends 250 metre from home.

However under brave racing by horse and rider, Clark and Pajaro managed to bullock their way through the narrowest of splits before driving home to beat Amovatio by a just over a head.

Scone born and bred, co-trainer Peter Snowden was in his home-town to see the heart stopping victory.

"You would have been disappointed if he’d got beat because Tim had a lap full of horse.

"Tim rode him for luck and he was squeezed-up at a vital stage but was good enough to pick himself and come again.

“It was a tremendous effort and I’m really proud of the horse.”

“Winning the Scone Cup with Paul and my family is certainly special,” added Snowden.

Tim Clark was also in awe of the horse and their Cup success.

"It was a good win. I was in a tricky situation at the furlong, but he barged his way through the opening when the run started to open and was really strong late.”

“It’s my first Scone Cup and it’s great to be wearing these colours,” added Clarke.

“I’ve ridden quite a few horses for Greg over the years — he’s a great supporter of the industry and deserves every win he gets.”

Pajaro marked Peter Snowden’s third victory in the prestigious Scone Cup following Dysphonia (2011) and Raspberries (2012) however this year’s win was the first under the ‘Team Snowden’ training partnership with son Paul.