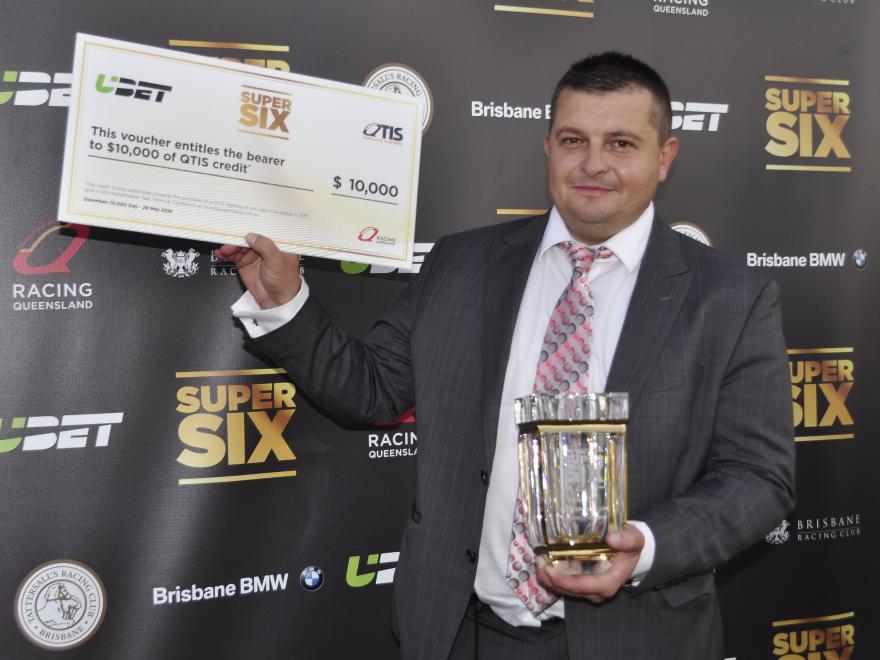 Team Snowden reclaimed the overall lead in the UBET Super Six Trainers’ Challenge after taking out Week 3 of the series at Doomben on May 28.

The Snowdens collected a total of 35 points courtesy of the win of Attention in the Mitavite BRC Sires’ Produce Stakes (1350m) and an additional three minor placings to score a narrow victory over John O’Shea and Darren Weir (both 30 points).

The results elevated Team Snowden to 80 points overall as they reclaimed the lead in the Super Six Trainers’ Challenge from series favourite Chris Waller (70 points) and Godolphin’s John O’Shea (65 points).

Victorian trainer Weir was the other big mover at Doomben today, as he shot to within striking distance of the leaders in fourth place on 45 points, while Bjorn Baker moved into fifth place on 40 points courtesy of the win of Music Magnate in the Group 1 Doomben 10,000.

For father-and-son training duo Peter and Paul Snowden, the win provided them with their second $10,000 QTIS voucher to be spent on any QTIS eligible horse at any Inglis or Magic Millions sale after they also won the daily prize in Week 1 of the challenge.

“We’ll certainly put that voucher to work, don’t worry about that,” laughed Paul Snowden after accepting the winner’s cheque.

“It’s unexpected, obviously you are judged on your performance on the day but we were lucky enough to come away with the win of Attention and the other supporting runners ran really well such as Charlie Boy in the Doomben 10,000.

“It’s very important for our owners to shine on days like today and luckily enough for us our horses are finding the line so it’s a good result.”

With the Snowdens in the box seat to win the major prize of a $140,000 BMW X6 courtesy of Brisbane BMW or an exclusive VIP trip to the 2017 Kentucky Derby for the trainer and six owners, Paul said he had already determined which prize he would choose should they be good enough to win overall.

“The car is mine if it happens,” he joked.

“We’re not a travelling family, dad doesn’t go away on holidays and the car suits us fine.

“But there is a lot of water to go under the bridge yet. We’re just happy to finish out in front today and whatever happens, happens.”

The Snowdens are likely to have a strong representation for the remainder of the UBET Super Six Trainers’ Challenge, which concludes on Tattersall’s Tiara Day where Black Type races are worth double points in an interesting final twist to the series.

“The Stradbroke has been the plan all along with Charlie Boy but with Dothraki, he campaigned through early Autumn so he’s a bit of a run-by-run scenario now so we’ll just see how he pulls up,” said Paul.

“The Oaks next week is probably one of our target races with two or three fillies that are going very well.

“Hopefully that can continue next week and who knows.”