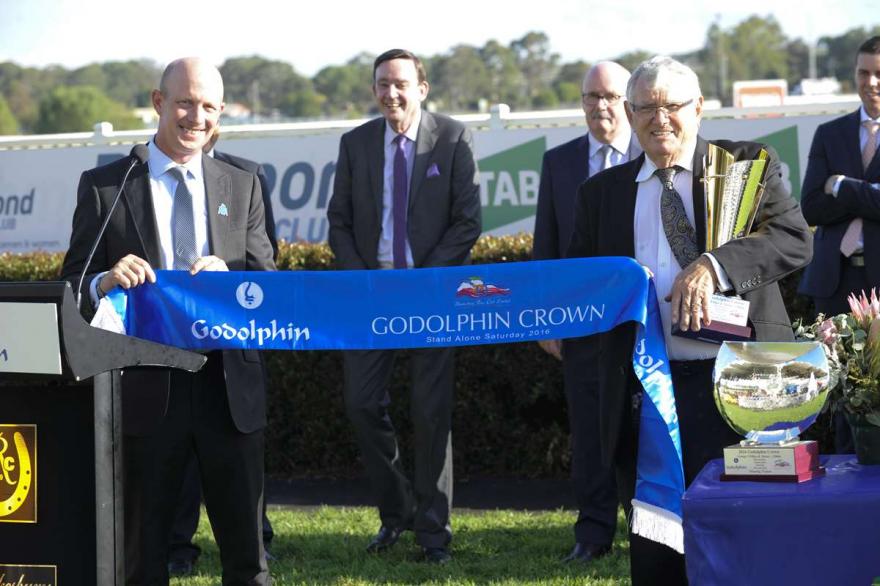 Self-made lobster fisherman Lex Kingdom (pictured far right) first started fishing for lobsters at the age of 13, before developing that childhood pastime in to a successful rock lobster business, known as Western Rock Lobster. But while developing his Western Australian-based fishing business, Lex had another burning passion; horseracing.

“After attending the 1960 Melbourne Cup I was simply hooked on racing,” recalled Lex.

“I originally raced a few horses with other part owners in Western Australia, but eventually decided to buy a filly outright and race under my own name of ‘Liberty Park’.”

That filly turned out to be Group 3 Godolphin Crown winner Nancy.

“I really liked her pedigree being by Big Brown, the 2008 Kentucky Derby winner and out of the dam Shalimar Sky who won five races.

“I lost my mother just after I purchased Nancy so she is named after her.”

Not a bad acquisition considering Nancy cost $65,000 at the Inglis Easter Yearling Sale and has accrued black type status with more than $230,000 in prizemoney highlighted by victory in the 2016 Group 3 Godolphin Crown (1300m) at Hawkesbury on April 30.

The win was indeed something to celebrate as Lex travels from Perth whenever Nancy races, and unfortunately for him, she experienced some unlucky transits in running during her previous three starts.

“I’ve always travelled interstate whenever my horses run so it was great to finally get a result like that in such a big race. It certainly made the trip home much better!”

You can’t miss the mare when she races, carrying white colours with giant coloured polka dots. “The vibrant racing colours were designed so I could pick out my horses more easily when racing and they’ve attracted a lot of attention and amusement, often likened to Twister.”

For those that remember, ‘Twister’ was hugely popular in the 80’s & 90’s and best known as the game that literally tied you up in knots (and no doubt caused some slipped discs)!

Originally trained by the late Guy Walter, who also trained Nancy’s mother, Lex made the decision to contact the Snowden’s when Guy sadly passed away unexpectedly.

“I had been following the success of Peter and Paul and really like their character and the way they went about their business, so I rang and thankfully they had room for her.”

The lightly-raced Nancy, who turns five on August 1, has had 10 career starts for four wins, three seconds and a third, proving a model of consistency.

“She’s a terrific mare who’s always showed talent and never runs a bad race. We’ve got a lot of time for her and all going well, we’ll target some nice black type races this Spring,” said Peter Snowden.

Once Nancy comes to the end of her racing career, she will join Lex’s other broodmares including Miss Occhilupo, Avec Mon Ami and Coco Pavlova located at Bhima in Scone.

But in the meantime, it’s no rest for the wicked. Now seventy years of age, Lex has an additional hobby to keep him busy and active. Marathon running!

Having competed in the Perth HBF Run for Reason (12 km run) since the event commenced in 2010 and also Sydney’s City to Surf for the first time last year, Lex is backing up in Sydney’s premier running event on August 14.

“I’m planning to do the City to Surf again which I love. It’s a great feeling being a part of a major community event like that.”