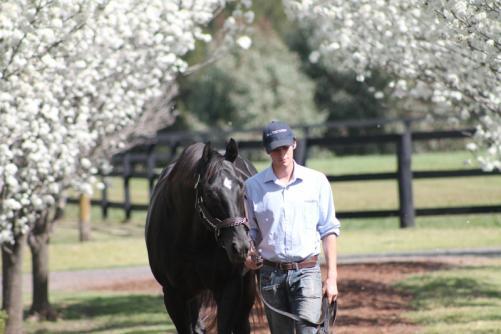 Race-favourite Madame Lily absolutely bolted in to take out the Wideline Windows & Doors Maiden Plate (1100m) at Wyong on August 5.

Runner-up at Canterbury on January 22 in her first career start to subsequent Group 3 James Carr Stakes winner Yattarna, the striking blue-blood raced on the speed under Josh Parr and kicked clear in the home straight to beat Penny Flight by 1.3 lengths.

“It was a lovely win by this mare and I’d suggest there is a lot more to come from her,” said co-trainer Paul Snowden.

“She’s taken a little while to come to hand but she’s showing great promise, has a great pedigree and is as honest as they come.”

Owned and raced by Vinery Stud, the stunning four-year-old mare by More Than Ready out of Group 1 STC Coolmore Classic winner Bollinger, is the fifth winner from five foals to race and a half-sister to a Group 2 winner, as Breednet further explores below.

A half-sister by More Than Ready (USA) to US Group 2 winner Friesan Fire from Group 1 STC Coolmore Classic winner Bollinger, Madame Lily is a blue-blood of the highest order.

Madame Lily was retained to race by Vinery and partners after failing to meet her $500,000 reserve at the 2014 Inglis Australian Easter Yearling Sale.


She is the fifth winner from five foals to race for Bollinger, but is her first bred here in Australia, the daughter of Dehere (USA) having started her stud career for Vinery in North America.

A half-sister to stakes-winner Sheraton and Mannington, the dam of Group 1 winner Benicio, Bollinger is from Golden Slipper winner Bint Marscay.