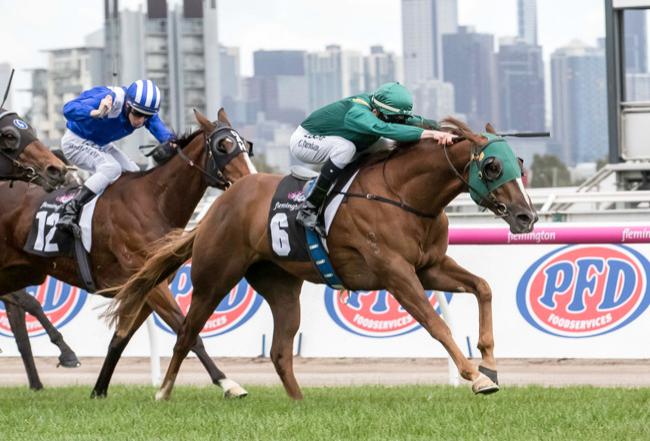 Promising chestnut colt Detective kept his winning record in tact this new season when stepping up to take out the $121,000 Listed Starlight Express Room Stakes (1400m) at Flemington on September 10.

Ridden by young Chris Parnham who’s in terrific career form, the son of Snitzel showed early speed to come across from barrier 12 and sit one off behind race leader Zunbaqa before working away with authority to beat Tessera by three-quarters of a length.

"He’s two from two this prep, and it was good to see him show a bit of fight,” said co-trainer Peter Snowden.

"It was a step up in class and he won again with authority but whether he’s got the class of a Guineas horse at this stage I’m not sure, but we’ll keep heading towards that path, take it one step at a time and see what happens.

"He’s getting stronger in his work and stronger in himself physically – so anything is possible but the plan from here is to probably go to the Prelude next."

Parnham, who continues to impress - especially Snowden, believing he’s got “a big future” in the saddle, was particularly happy with Detective’s relaxed attitude and will to win.

“I was real happy with the way he relaxed. I always had a lap full of horse coming to the corner so I just waited as long as I could before I asked the question and he found a few lengths.

“At the 150 I thought the other horses were going to go past me but he fought on and it was a tough win.

“I think he’ll get a mile plus with his attitude, will to win and the way he relaxes.”

Purchased and raced by James Harron Bloodstock and a wider group of notable owners including Newgate Farm, Belinda Bateman, and John and Fran Ingham, Detective was a $220,000 Magic Millions yearling purchase from the Arrowfield Stud draft, and became the 42nd stakes-winner for Snitzel.