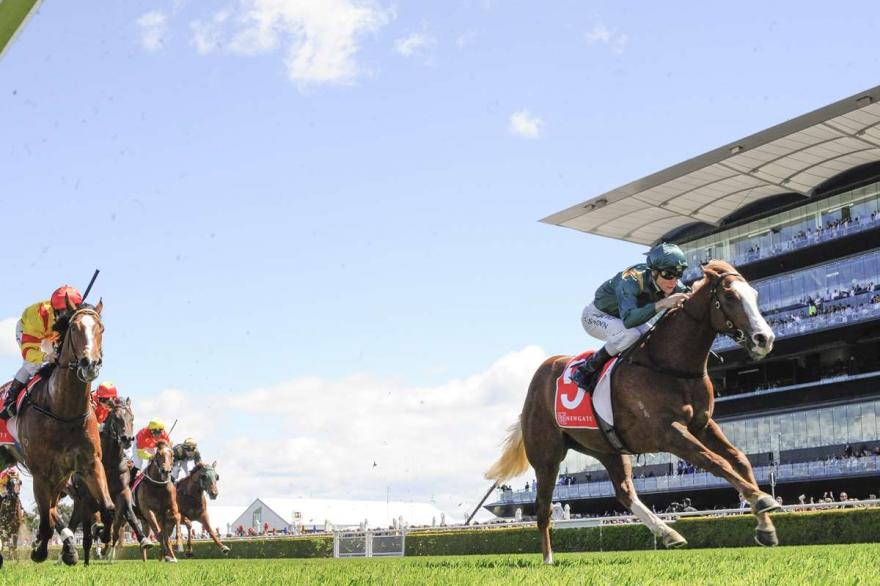 Following in the footsteps of Australia’s 2016 Champion 2YO, Capitalist (who snared the lucrative Magic Millions-Golden Slipper double earlier this year), Khan displayed superior ability when winning at the two-year-old trials last month, giving punters a taste of what was to come.

At his first ever race start, the flashy son of Exceed And Excel jumped well and took position midfield on the fence before being manoeuvred out to rocket home down the straight to catch race-favourite Condor Heroes in the final furlong for an exciting length victory.

“What a top quality colt and what a terrific win that was,” said co-trainer Peter Snowden.

"We thought he would lack pace early but Blake rode him extremely well and gave him time to find his feet.

"I did think the winner had skipped away and had a winning break on him at the furlong but full credit to the horse, he knuckled down nicely and hit the line very well.

"He's got a pedigree to suggest he will get a lot further too."

Jockey Blake Shinn also believes the “sky is the limit” for Khan and is looking forward to seeing him get over more distance with a firm view towards the 2017 Golden Slipper.

"Full credit to Peter and Paul Snowden and their team and to James Harron for selecting another outstanding two-year-old," said Shinn.

“He was so professional in everything he did, he jumped great and gave me a sweet ride. I had to spot the runner-up about five lengths at the 300m but he showed a great turn of foot.’’

“Although Khan is by Exceed and Excel, he has stoutness on his dam’s side, which should stand in him good stead going towards a race like the Golden Slipper. The sky is the limit for him.’’

As reported on Breednet.com.au, the $260,000 Gold Coast Magic Millions purchase from the Glenlogan Park draft, is the first winner for Mandawara (FR), a half-sister by Daylami to triple Australian Group 1 winner Manighar (FR). His appearance is eerily similar to Exceed and Excel's triple Group 1 winner Helmet (trained by Peter Snowden), who was also bred from an imported European mare with a big black type international family.