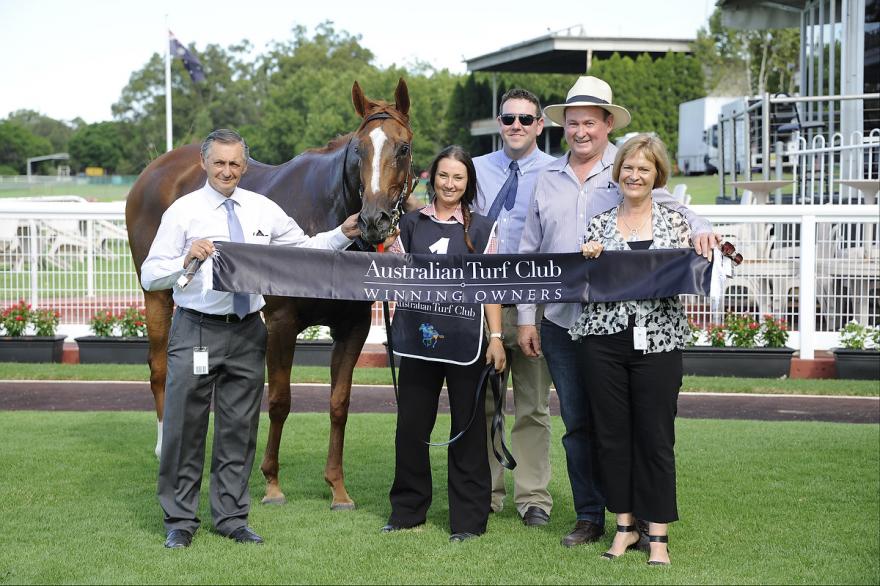 “After multiple surgeries we were called on a Friday because the vets felt they couldn’t do any more to save her, she was battling.

“We reluctantly made phone calls to the insurance agency to notify them that we were most likely going to have to put her down, but as it turned out, luckily we couldn’t get the clearance so I instructed the vets to do whatever they could to help her in the meantime.

“Monday morning I got a phone call saying that she’d picked up.”

This is the crucial turning point in the life of Extensible according to her loving North Queensland-based owners Don and Judy Kelly who’ve long raced and bred racehorses.

The then two-year-old daughter of Exceed And Excel initially got cast in her box while spelling and subsequently injured her fetlock. The joint was treated with antibiotics but quickly deteriorated and the vets felt she couldn’t be saved from the infection but a miraculous will to survive shone through and it was game on again for the filly.

“We opted to take Extensible out to Alex Kingston at Kia Ora Stud and got hold of Dr Angus Adkins. He looked at the x-rays, and felt it was a bone cyst and was treatable.He drilled into her bone above the fetlock, and drained out the infection,” explained Don.

“It took her seven months recovery in a box with antibiotics to get over it and here she is winning at Rosehill. We couldn't speak more highly of Alex, the staff at Kia Ora and Dr Adkins for their dedication to the care of her.

“She’s a lovely mare and a real fighter.”

It took a six figure sum to save the life of Extensible - without any guarantees of course - and it’s a decision the Kelly’s would make time and again.

“We get more than emotional when she runs because we’re so lucky to have her here, let alone see her win,” added Don.

“There’s a reason she fights at the end of a race. It’s because she’s tough.

“It’s a game of patience, and yes, it can be costly, but she’s already fought her biggest battle and we couldn’t be any more proud.”

While the flashy chestnut mare, who’s now won 4, and placed in 5 from 10 starts, continues to rise with black type races now calling, the Kelly’s have another promising girl in training; Faith’s Encore.

Their home-bred three-year-old by Denman out of Faith Hill is only lightly raced with two city wins and a third from just three starts and is showing promise.

"We owned a Danehill mare Faith Hill and with the Lonhro-Danehill cross proving so successful we chose to mate her to his striking son Denman,” said Judy.

“We’ve also been patient with Faith’s Encore and it’s starting to pay off. We try not get too involved with her preparations, that’s what Peter and Paul do best, but it’s an exciting time and we fly down from Queensland every time our horses run.”

“She’s a well-bred filly with plenty of upside. She works with the better horses at home and does it very easily, so we’ve always known she’s had ability,” said co-trainer Peter Snowden.

“She’s still a bit raw and immature but I feel she’ll go a fair way. We’ll look at how the Red Roses shapes up on Oaks Day, as that could be a good target if she keeps improving.”