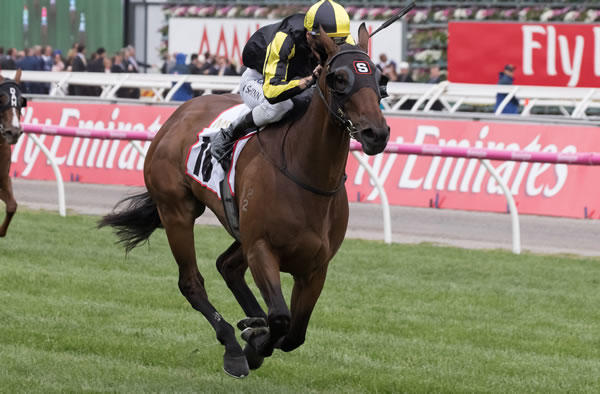 Star mare Flippant won her third race at black type level when she sizzled down the Flemington straight to take out the $150,000 Listed MSS Security Sprint (1200m) on Cup Day.

Coming in at the generous odds of 30-1, the four-year-old daughter of Hinchinbrook was given a peach of a ride by Blake Shinn who sat just off the leading bunch at the 600 metres mark before setting her alight as they approached the 200 to defeat Group 2 Bobbie Lewis Quality (1200m) winner Faatinah by 2.5 lengths.

“She lost her way a little bit towards the end of last season but we gave her a really good spell and she’s come back in great order,” said co-trainer Paul Snowden.

“To get a result today is fantastic.”

Shinn was ecstatic to deliver the goods on the biggest stage in Australian racing.

“That was awesome to do it for Team Snowden, my number one supporters. These four days at Flemington are the biggest four days of Australian racing so to be able to come down here and ride a winner is very special.

“Flippant was dominant, we had a lovely run, she really extended nicely and it’s great to get her back in winning form.”

As reported by Breenet, Flippant is bred to be as good as the second winner from two to race for Lady Beckworth, who is a winning half-sister by General Nediym to the dam of Group 1 stars Atlantic Jewel and Commanding Jewel.

Closely related to Atlantic Jewel, who is by Hinchinbrook's sire Fastnet Rock, Flippant was the most expensive filly from the first crop of Hinchinbrook, so it's fitting to see her emerging as such a smart mare.

Lady Beckworth was sold as part of the Bell River Dispersal earlier this year at the Inglis Australian Broodmare Sale where she was snapped up by Henry Field Bloodstock for $400,000 in foal to Hinchinbrook. She produced a full brother to Flippant for her new owners this spring.