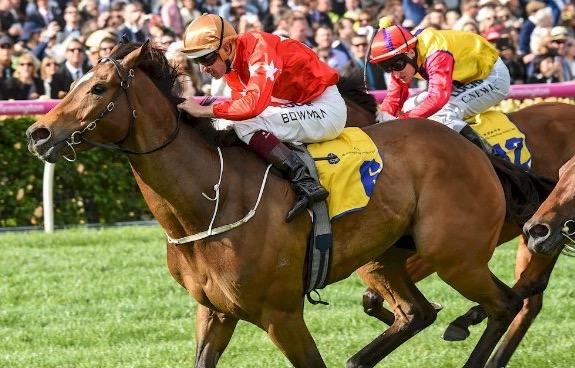 Ridden to perfection by champion jockey Hugh Bowman, the pair settled beautifully in the back half of the field three horses wide with cover, until Bowman asked the mare to make her typical withering run home just after the 400 metres.

Artistry answered the call and simply mowed down the field to beat Shillelagh by half a length to record a seventh career win (two at Group 3 level) and over $450,000 in prizemoney.

“She ran really well fist up, but covered too much ground on the day, but she likes it hard and tough.

“That’s the key to her, if you ride her too pretty she breaks her stride but when she’s three or four deep on the bend and can run home, she just loves it.,” explained co-trainer Paul Snowden.

“Full credit to Hughie, it was a great ride.

“You’re on the world stage, everyone’s watching today and it’s a big thrill. To get one get win is great but to get two is a real feather in the cap for the team.

“We now look forward to Thursday and Saturday,” added Snowden.

Bowman said the mare was ultra-impressive and appreciated the big track.

“Another great day for Snowden Racing. They’re great supporters of mine and this mare was ultra impressive.

“We had a beautiful run in transit and it’s all about momentum with her. She’s beautifully suited to Flemington.”

The victory made it a winning double for Team Snowden at headquarters with Flippant scoring the previous event, and a total of four winners Australia-wide to complement Diplomacia and Plot Twist’ efforts earlier in the day at Kembla Grange and Randwick.

Owned by Neven Botica, Breednet has described his dual Group 3 winning homebred by Shamardal as “the best of two winners from unraced Belong to Me (USA) mare Lady Peony, who comes from the family of Champion 3YO Filly Samantha Miss and Group 1 winner Cronus.”