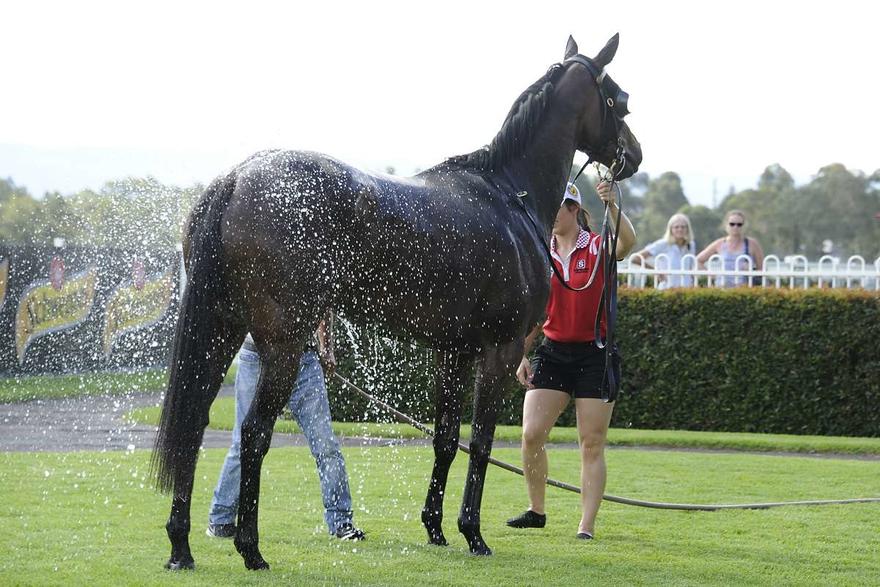 Jolie’s Pearl pulled out all stops to keep her clean winning record in tact at Hawkesbury when taking out the $30,000 Peter Kelly Flooring Class 1 Handicap (1400m) on December 4.

Having jumped well midfield, Jolie’s Pearl and Nick Heywood found themselves in a less than ideal position three-wide, until a decision to shift to the inside rail at the 700m proved a winning one.

The Fastnet Rock filly saved significant ground as a result and burst clear for 0.8 length victory ahead of Immortal Miss, giving her back-to-back wins at just her second career start.

“She is a nice filly, and it’s great to see her keep winning,” said co-trainer Peter Snowden.

“I was worried where she was [in the run] early on because I thought she’d be outside the leader but she was good enough to overcome that and saved ground around the corner.

“She’s got talent but needs to learn more about the game yet…She’s shown us a bit at home but it’s been a bit hot and cold mainly due to immaturity and being a bit soft, but that’s what you get with the Fastnet Rock’s - the older they get the better they get and she’s going to fall in that category.

“I like the way she keeps improving, she’s a good doer at home, and keeps doing the right things so that’s all we can ask for at this stage.”

Heywood, who continues to improve his craft with every ride, believes the daughter out of 2009 Singapore Horse of the Year Jolie’s Shinju (JPN), will get better over longer and handle the step up in class.

“We got in to a bit of trouble early on so I went back to the inside to give her cover and she did the rest.

“She found reasonably well, Peter and Paul are putting her in races she can win and it’s paying dividends.

“The further she goes the better she’ll get. She relaxes underneath very comfortably and gives a nice kick so she’ll no doubt go up in the grades.”

Part-owned by Coolmore Stud but carrying the colours of West Australian owner-breeders Bob and Sandra Peters, Jolie’s Pearl was an $850,000 Easter purchase and her full brother will go under the hammer at the 2017 Inglis Easter Yearling Sale from the Coolmore draft.

At this stage, Jolie’s Pearl will head to Canterbury next start to tackle a 1550m for three-year-old fillies and mares to further test her capabilities.