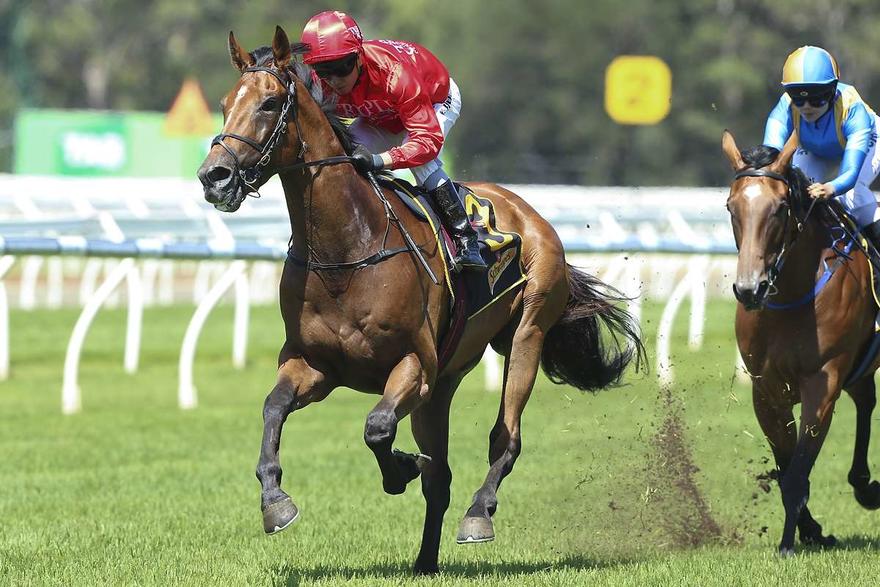 Triple Crown’s Gold Symphony pounced on rivals in the $100,000 Schweppes BenchMark 92 Handicap (1400m) for a dominant victory on the heavy 8 at Warwick Farm on January 7.

A clever ride by Kerrin McEvoy saw the outsider settle quietly just behind in the four-horse field until the pair cut the corner on the home turn and bolted clear at the 300 metres leaving race-favourite Imposing Lass languishing by almost two lengths.

“That’s the way to ride Warwick Farm when it’s wet. Cut the corner and come out and that’s what Macca did; it was a winning move…He saved every inch of ground,” said co-trainer Paul Snowden.

“His run wasn’t too bad the other day at Rosehill, where he got home late. There was a little bit to say he could bounce back.

“He is in at the right time of year and hopefully we can butter up again in the next couple of weeks for the Triple Crown team.”

McEvoy said that the gelded four-year-old by Reward For Effort out of Tzaress would take confidence out of the win, and that the “best is yet to come.”

“He enjoyed himself out there. He was up and rolling and making ground on the leader so I thought I’ll just let him flow into it and he got there quite easily.

“He has been gelded and the best of him is yet to come.

“He showed promise early but lost his way a little bit. He enjoyed the ground and seven furlongs was perfect.”