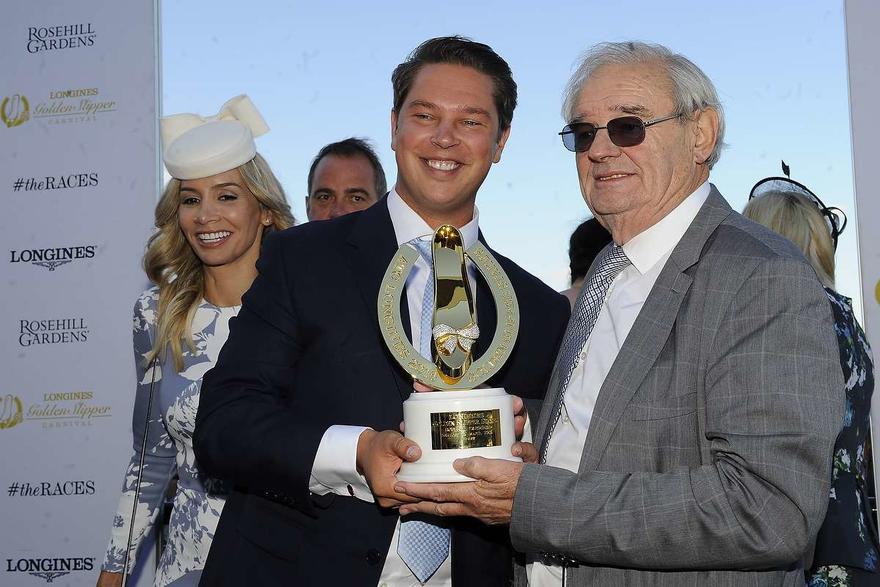 Our owner profile this quarter is on leading bloodstock agent James Harron who has experienced rapid success in a short period of time thanks to identifying elite thoroughbreds such as Capitalist, Sweet Idea, Foxwedge, and Wandjina, among many others.

Here we learn more about his meteoric rise, ambitions, thoughts on the thoroughbred industry, and finding that next champion.

Born in Northern Ireland, Harron moved to Australia in his early twenty’s and worked his way from the bottom to the top of the Australian bloodstock industry through roles with Coolmore Australia, Gai Waterhouse and international bloodstock agent Hubie de Burgh, before taking the plunge to create his own Sydney-based bloodstock agency in 2011.

Six years in – and at 31 years of age, Harron and his group of clients are riding a huge wave of success with over 50 stakes wins – including 11 at Group 1 level – the most recent being last year’s Golden Slipper hero Capitalist, and several stallion deals brokered including Pierro, Foxwedge, Fiorente, Wandjina, and Vancouver.

Who’s the most inspiring or influential person(s) you’ve met James? George Smith immediately comes to mind; he was the yearling selector for Tommy Smith and later Gai Waterhouse. George was exceptionally generous with his time and I always tried to be like a sponge, absorbing as much of his exceptional knowledge of conformation and inspection as possible.

The late Edmund Bateman was also a huge supporter along with his wife Belinda. He was hard working and very successful with regard to anything he put his hand to - he made me look at things differently and was a great role model.

What do you look for when buying a colt and filly? I’m looking for a well bodied horse with a good attitude and action. Pedigree takes them so far, but I am a huge believer that physical type is the biggest part of the puzzle.

What are your non-negotiables on type selection? Horses which lack any overall general strength.

How did it feel to win the $2M Magic Millions and Golden Slipper double with Capitalist last year? Both were hugely special days. I have some very special owners who have supported me, and the only way to repay that faith is on the racecourse. To have a horse like Capitalist in the first year of the colts syndicate venture was a dream come true.

Looks like you have another one full of natural talent in Breeders Plate winner Khan …Tell us a bit more about him and why he appealed to you as a yearling? He was just a strong powerhouse of a colt who walked around the sales ground like he owned the place. There are elements of his pedigree which suggest that he’ll be equally effective over a little further, so seeing him win the first stakes race of the year over 1000m was tremendously exciting.

What does the Australian thoroughbred industry do best and what are areas for improvement? I think that prizemoney is outstanding, but just as important is the ownership experience, which is unparalled in Australia. Trainers understand the need for good communication and all of this works together to create a superior ownership experience. In terms of improvements, I think that an increased harmony behind the different racing states would only be a good thing.

What did you make of the 2017 Magic Millions Yearling Sale in terms of quality of stock, market trends and ability to buy what you set out to buy? I thought that it was a great sale, there was something for everybody and I was delighted with the horses we were able to secure, including thirteen colts heading in to be trained by Peter and Paul.

How do you see the rest of the yearling sales circuit unfolding this year from a buyer’s perspective? I would imagine much of the same, it’s a healthy and stable market at present.

How would you best summarise Peter and Paul as racehorse trainers? Peter and Paul are masters of their craft - no stone is left unturned and they get the maximum out of every horse. They are also very humble people who are very enjoyable to deal with.

It’s all happening for you in 2017 having secured twenty-four yearlings at Magic Millions, and you and your wife Alison are about to become first time parents. How excited are you? Yeah, first and foremost, that is the most exciting news and we can’t wait to enter that era of our lives. Regarding the yearlings we were very pleased with what we were able to purchase and can’t wait to see what they can do on the track.