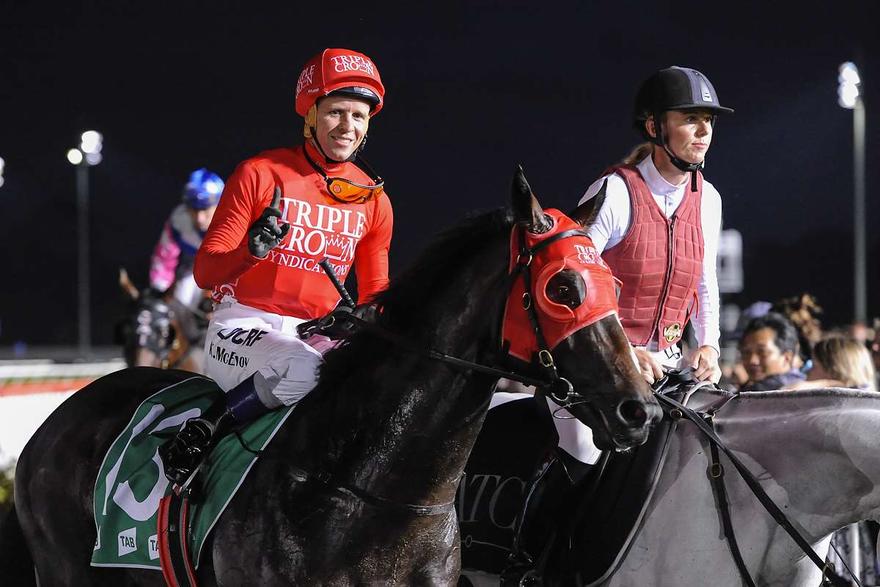 Team Snowden scored a winning double at Canterbury on February 3 with Onslaught and Madame Lily, each recording their second career win from just five starts.

Taking advantage from the inside barrier, Onslaught led and made it back-to-back glory from a maiden to a city win in the $40,000 BenchMark 67 Handicap (1250m) under a masterful rails hugging ride by Kerrin McEvoy.

It was touch and go in the final stages however the Triple Crown-owned Snitzel gelding held on by a head to beat Lord Macau, with stablemate Ajani in third position.

Like any maiden winner stepping up in class, the in-form three-year-old needed everything to go his way, as explained by co-trainer Peter Snowden.

“He had all the favours tonight and needed every one of them.

He’s still very immature but doing a good job and will only improve later on. We’re very pleased to get another win for the owners.

McEvoy, who rode a winning treble on the night, said Onslaught had come a long way this campaign.

“He’s come a long way this prep. He’s put two wins together and jumped from a maiden to a town win so well done to the connections.”

To close out the card, our favourite little pocket rocket, Madame Lily showed all heart to take out the $40,000 BenchMark 67 Handicap (1250m).

Partnered by McEvoy again, the pair raced up on the speed in fourth position and knuckled down in the final 200 to pull off a gritty win ahead of Chatuchak with stable mate Aaralyn in third position.

Co-trainer Paul Snowden, who was on hand with his father, said the petite fireball embodied a winning spirit and heart of gold.

“There’s a will to win there. She’s only small but boy she’s got a heart of gold. Full credit to Kerri McEvoy tonight; he rode her really well.”

By More Than Ready out of Bollinger, the well-bred mare who carries the famous Vinery Stud colours also impressed the pilot.

“She’s not overly big so Peter and Paul have been taking their time with her. To me she’s rounded up a little bit more and her last run showed she’s come back in nice order.

“I thought I may have hit the front a bit too early at the 250 but she picked up nicely and was good enough to hold them off.

"I think she’s versatile and there’s more races for her,” said McEvoy.