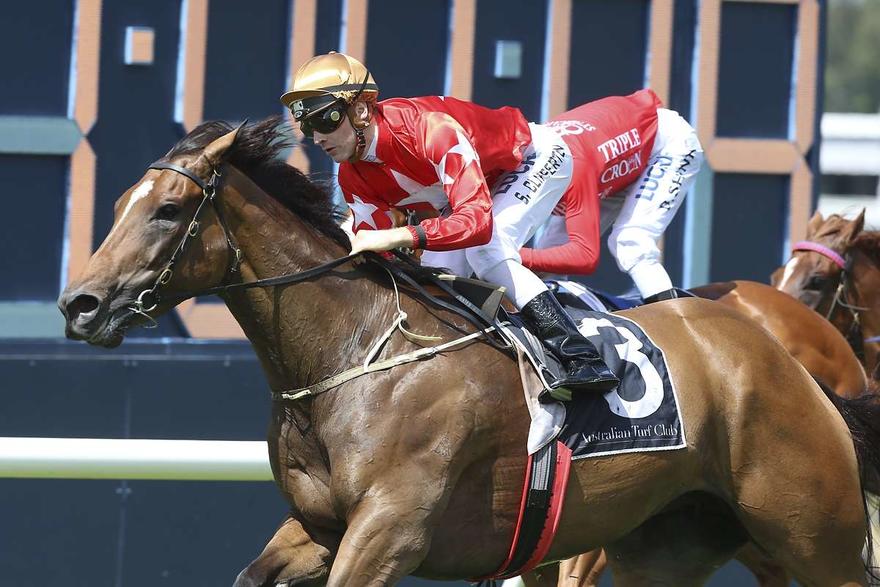 Star mare Artistry swooped home in emphatic style to take out the $150,000 Group 3 Smooth FM Maurice McCarten Stakes (1100m) on Day 1 of the Golden Slipper Carnival at Rosehill on March 11.

First up since winning the 2016 Group 3 Hong Kong Jockey Club Stakes (1400m) at Flemington on Melbourne Cup day, Artistry settled last and gradually made her way in to the race under a perfectly rated ride by Sam Clipperton to finish over the top of stablemate Dothraki for a half length victory.

With the Rosehill track rated a soft 7, Team Snowden were unsure as to how effective the talented daughter of Shamardal would be on a surface she has shown a previous dislike for but that didn’t deter the five-year-old who recorded a third Group 3 victory in the process.

“We had to delay her autumn campaign by a couple of weeks due to wet tracks because it’s not her preferred ground, but being fresh and over 1100 metres, we thought she may just get away with it today,” explained co-trainer Paul Snowden.

“All her form is 1200 metres and beyond so it was uncharted territory but she has come away with a win.”

“She’s an absolute darling who aways puts in. Our other runner Dothraki put in a top effort too. While it would have been great to get a dead heat for our owners, we’re happy with a winning quinella,” added Snowden.

“We may even head straight to the Sapphire; we’ll see what happens with the weather.”

A homebred for West Australian-based Neven Botica, Artistry, who’s now won eight races and more than half a million is prizemoney, is a daughter of the unraced Belong To Me mare Lady Peony whose dam Zebizan is a sister to Group 1 winner Cronus and Group 2 winner Pravda as well as the unraced Milliyet, dam of champion mare Samantha Miss.