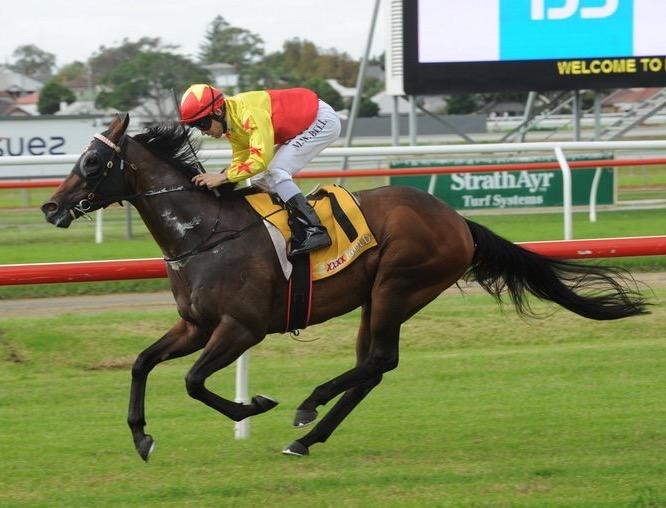 Team Snowden were delighted to claim a treble with three promising three-year-olds at Newcastle on March 25 which included the stunning debut win of California Archer.

The High Chaparral gelding led impressively throughout to complete an early race to race double for the stable, following the breakthrough win of Red Hearts while the stable’s icing on the cake came in the final event when Sebring colt Argentina recorded his second career win.

California Archer began quickly from barrier 11 to lead comfortably for an all the way victory in the $30,000 maiden plate by almost four lengths ahead of Fabricator. He ran the 1200 metres in 1.10.03 which was the quickest of the five races over that distance to run at the meeting; an indication that the track may have been better than its official soft 6 rating.

“He’s just taken a little while to mature but he’s a lovely animal going places and that was a dominant win!

“We couldn’t be any happier for Mr Liang, he’s a wonderful client to deal with and has been a huge supporter of the stable from the get go,” said co-trainer Paul Snowden.

California Archer, from the same family as champion stallion Fastnet Rock, was a $420,000 purchase at the 2015 Inglis Easter Sales for Hong Kong-based owner Howard Liang, who likes to name his horses with reference to The Golden State.

Mitchell Bell was aboard the first two winners while Bobby El-Issa rode Argentina. Bell secured a quinella for the team as his mount Reinforced, finished extremely well in the race, but was out performed by the Newgate Farm-China Horse Club and Horse Ventures-owned Argentina who took a gap along the inside and sprinted clear in the $30,000 CG&E Class 2 Handicap (1200m).

“Bobby read the play perfectly when he hooked Argentina to the inside once everyone got going in the home straight,” said Snowden, “He’s still relatively lightly raced but the penny is definitely dropping now and conditions really suited today.”

Owned by Torryburn Stud, promising Lonhro filly Red Hearts, had earlier broken through for her maiden win courtesy of a peach of a ride from Bell.

Red Hearts drew barrier ten but the hoop was happy to go forward from the outset and quickly had her with a ‘run of the race’ trail, one off the fence in third place. She loomed to the leaders on straightening and rallied strongly to win by three quarters of a length from Mandolize (by the Snowden-trained Champion Two-Year-Old Sepoy).

John Cornish, principal of Torryburn, was on hand to see the daughter of multiple stakes-winner Crimson Reign win after recording placings at her first four starts, on slow and heavy ground.

“That was a bit of a relief,” said Cornish, “She was looking for better ground and she might even want a bit further now. But we’ll think about that with the team over the next few days.

“It was a lovely ride from Mitchell to get her over like that.”