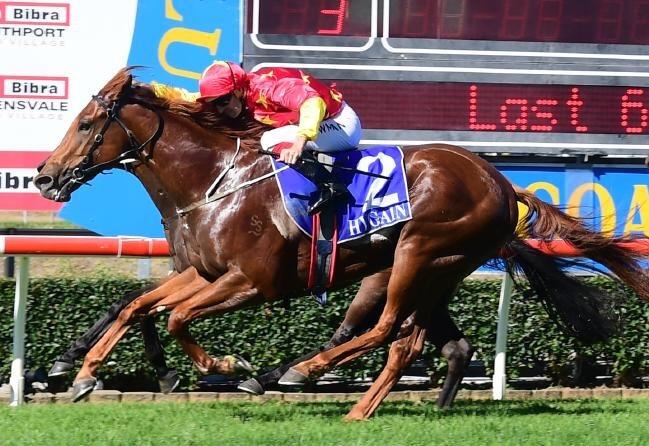 Paul Snowden said the $520,000 Choisir colt would take huge benefit from Saturday’s win as he heads to the BRC Sires Produce and possibly J.J. Atkins.

“We actually wanted to give him a run before he came up here, but they gave him 62kg in a maiden, so we decided to trial him again and bring him to this race first up,” Snowden said.

“He pulled the whole way. He had one fall back in his lap at about the 800m, which makes them go hard.

“He needed to blow a bit of wind out so to speak and he’s going to be more relaxed when he gets to 1400m next time.”

The Snowdens have enjoyed a golden run of success with the China Horse Club colours and are hoping it extends to next Saturday’s Doomben 10,000, where Russian Revolution is the ruling favourite.

Hugh Bowman said Taking Aim was “a nice colt that was well placed” in Saturday’s race.

Earlier in the year he failed in the Blue Diamond, with that race being somewhat of an afterthought.

“It wasn’t on the agenda but because he ran so well the week before and he was down there, we decided to run, but he wasn’t really ready,” Snowden said.

“He’s been a lovely horse from day one and we’ve always had him marked as a quality colt.”

The feature Gold Coast day has been a good one for the Snowden stable.

From limited runners, Taking Aim was the fifth winner between Team Snowden and Peter in his own right over the past five years.