Snowden Magic To The Fore 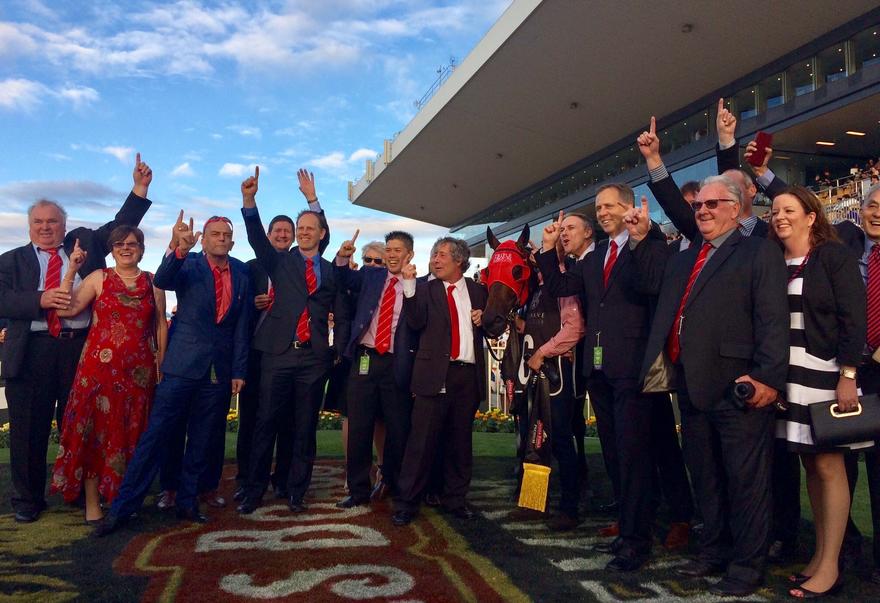 In the hysteria of Redzel’s win in yesterday’s $700,000 Group 1 Doomben 10,000, syndicator Chris Ward marvelled at how far he and brother Michael have come over the past decade.

The pair’s Triple Crown brand is now one of the most prominent syndicates in Australia.

Redzel has a team of “13 or 14” owners (it felt like 10 times that with their victory celebrations yesterday) but Ward said Triple Crown has had “thousands” of owners race horses in their colours since they set up 12 years ago.

“In the early days we were buying one horse a year and very cheap,” Ward said. “We’ve been building year after year and now we buy 18-20 horses a year that are much higher quality.”

The Wards are entitled to have a soft spot for Queensland.

Two of the three Group 1 winners to have raced in their prominent red and white colours won their big races in Queensland. Snowden–trained Hot Snitzel landed the BTC Cup two years ago and on Saturday [May 13] Redzel took the Doomben 10,000.

The other Triple Crown Group 1 winner was Peggy Jean in the 2014 ATC Sires Produce Stakes.

Ward feels there is no coincidence their success has grown since linking with trainers Peter and Paul Snowden. “They’re the best in the business and we are very lucky to be their exclusive syndicators,” Ward said.

Trainer Peter Snowden and jockey Jim Byrne shows off the spoils of victory.

Like any owner with a top-line sprinter at the moment, Ward has ambitions for a tilt at Australia’s richest race in the spring. “We will have to have a serious look at the Everest now, he just keeps improving all the time,” Ward said.

The Snowdens have been supporters of the Queensland carnival since they teamed up and it’s rare they go home without a feature winner.

This was their ninth Group 1 as a partnership and second in Queensland after Hot Snitzel.

Peter represented the team on Saturday.

“We didn’t think there was much between Redzel and Russian Revolution after they ran the quinella in the Group 1 Galaxy in the autumn,” Snowden said. “They had both trialled well and they had both done well here.”

Snowden indicated both Redzel and beaten favourite Russian Revolution would go for a spell.

“He has done a good job and he has got his deserved Group 1. He can have a rest,” he said.

“He got Redzel out and made them run his race. We went through the details about 27,000 times in the lead up to the race,” Snowden said.