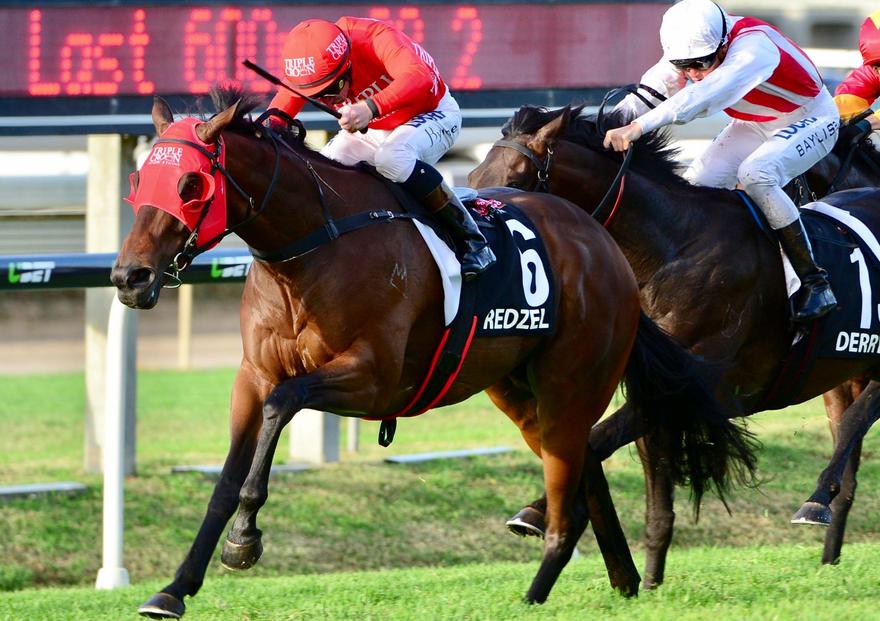 Triple Crown’s progressive four-year-old son of Snitzel, who gifted his sire with a fifth Group 1 for 2017, simply dictated terms and controlled the pace from go to whoa for a half-length win over Counterattackin the first elite event of the Brisbane Winter Racing Carnival.

Co-trainer Peter Snowden, who won the Doomben 10,000 with Beaded (2011) and Epaulette (2013) always believed Redzel had what it took to get the job done

“The 10,000 is such a time honoured race so it’s a privilege to win it with a horse that really deserved to.

“Full credit to the horse…He’s promised so much and has come a long way. He’s very honest, genuine and deserves every bit of it. It goes to show, if you give them a bit of time and that self-belief, the horse will give everything. There's wasn't much between him and Russian Revolution.

“He’s just kept getting stronger and he’s winning races with authority and I’m very proud of him,” added Snowden.

"It's also great for Triple Crown and their terrific group of owners to be rewarded. It's a winning double for them actually as we won earlier today with Rockin' Red Rocket at Kembla."

Snowden and Byrne left nothing to chance in pre-race preparations.

“We went over this race 27,000 times," laughed Snowden. "Jim went through every nook and cranny and we talked about what could and couldn’t happen and it panned out perfectly because he controlled the tempo, rated him nicely and the horse did a good job.”

Byrne, whose last Group 1 winner was in the 2008 Queensland Derby, recently gave serious consideration to moving to Mauritius for a riding contract but opted to stay close to family in Queensland and was rewarded with the ultimate prize.

It’s a huge thrill to win this race. I’m rapt,” said Byrne. “I am very thankful to my manager Cameron (Partington) for chasing the ride and to the Snowden’s for giving me the opportunity.

“You can never go into these races overly confident because so many different scenarios can unfold but I knew coming to the turn…if I could hold him together that little bit longer he would make it a little bit difficult [for the others to catch him].”

“I was able to get a little breather in the middle stages and as we saw in Sydney last time, he can sprint home really quickly under those circumstances. He’s raced really good throughout this preparation and gotten stronger.”

Redzel will now be spelled ahead of a Melbourne spring campaign that will likely include Group 1 assignments in the Moir Stakes (1000m), Manikato Stakes (1200m) and Darley Classic (1200m), with connections also giving thought to the inaugural $10 million The Everest (1200m) at Randwick in October.