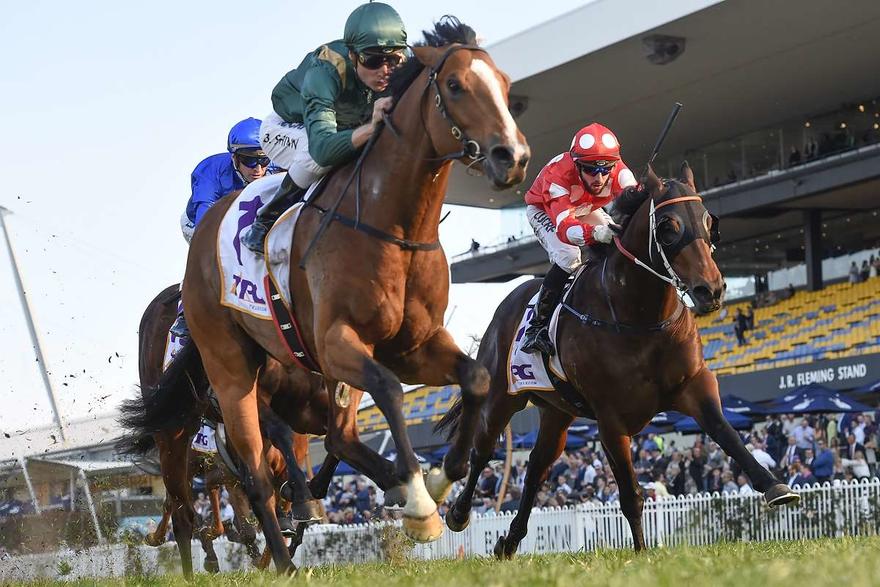 Boom colt Pariah, with the powerful physique and racetrack performance to complement his prized pedigree, moved to the top of Golden Rose betting with a brilliant return to racing at Rosehill Gardens on Saturday 26 August.

Pariah, aided by a superb Blake Shinn ride, showed he is going to be a major player in the feature three-year-olds races this spring with a dynamic win in the Group 3 $150,000 San Domenico Stakes (1100m).

Peter Snowden, who trains in partnership with his son Paul, said Pariah will improve with the run which augurs well for the colt’s spring campaign.

“Blake did get a perfect run from the draw, followed the right horse and the gap came for him on the turn but it was still a very good effort from the colt,’’ Snowden said.

“This was a very fast run race and during the run Pariah was only just there. But when he gets to 1400m the tempo will suit him and then he will show an even better turn of foot.’’

Pariah was heavily backed from $2.80 to $2.10 but he gave his backers little cause for concern as he raced clear halfway down the straight and held off the fast-finishing Chauffeur ($10) with the filly Jorda ($8.50) producing a fine comeback effort to claim third, a neck further back.

Snowden confirmed Pariah will be aimed at the Run To The Rose in two weeks as a final tune-up for the Group 1 $1 million Golden Rose (1400m) at Rosehill on September 23.

“All we are concentrating on is the Run To The Rose and then the Golden Rose,’’ Snowden said.

Pariah was so impressive first-up TAB Fixed Odds price assessors elevated the colt to favourite at $6 (from $9) for the Golden Rose.

“Peter and Paul always peak their horses at the right time,’’ Shinn said.

“They had him wound up today, but they always leave something in the tank for the Grand Final and I’m sure come the Golden Rose he’ll be absolutely spot on.

“We’ve always had the belief that Pariah was a top-liner and he narrowly missed the Blue Diamond, but we really thought he had made nice progression to a three-year-old. He gave me a lovely ride and as the race panned out I got more confident, just had to extricate my way out at the turn.

“I was able to find the rail and got on the back of Jorda and when the runs appeared I took them. At the top of the straight I was very confident as I know he’s got a great turn of foot and he delivered today.’’