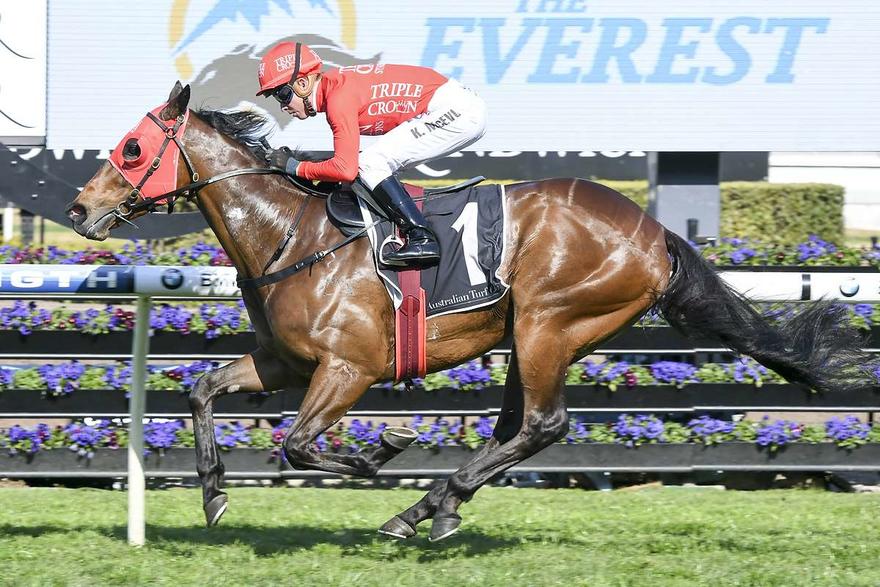 Redzel, the most improved sprinter in Australia, has surely done enough to earn a start in the $10 million Everest Stakes after another brilliant speed display at Royal Randwick on Saturday.

Kerrin McEvoy, rider of Redzel, seized control of the Group 3 $150,000 Concorde Stakes (1000m) at the start when he wrested the lead and then ran his rivals ragged.

Redzel was too fast, too strong and too good, beating his three rivals comfortably and running the Randwick 1000m in a brilliant 56.23 sec.

Co-trainer Paul Snowden said McEvoy rode Redzel exactly to plan with the five-year-old gelding producing an emphatic return to racing and staking an undeniable claim for a start in The Everest (1200m) at Royal Randwick on October 14. “I’ll tell you how to explain this horse — he is an each-way bet to nothing,’’ Snowden said of Redzel’s Everest chances.

“He will run you top three and have a fair, cracking chance to win it.’’

Part-owner Chris Ward of Triple Crown Syndications revealed there has already been interest from Everest slot-holders looking to lock in a runner for the world’s richest turf race. “He should just about get a start in The Everest now,’’ Ward said.

“There has been some discussions but I think the slot-holders have been waiting to see how Redzel returned to racing and that is fair enough.’’

Starting $2.35 favourite, Redzel certainly made a statement with his two-length win over Spieth ($2.70) with Nieta ($5) a length away third, just in front of The Monstar.

A winner of the Hall Mark Stakes and Group 1 Doomben 10,000 at his final two starts last season, Redzel picked up where he left off with a dominant all-the-way Concorde Stakes win, prompting TAB Fixed Odds price assessors to slash his odds for The Everest from $15 to $11 behind Chautauqua at $4.60 favourite.

“We wanted to drive him out of the gates and got to the front early,’’ Snowden said. “We were always going to make our intentions clear early and be aggressive. It’s how he likes to roll.

“Redzel has come back in fine fettle. I’ve been quoted as saying early in the prep that this is his best preparation yet, the way he can idle when he gets to a cruising speed. We’ve all seen how he can sustain that over six furlongs (1200m).

“But it’s been all about an Everest preparation and he will go to the Moir Stakes next and then hopefully straight into The Everest.

“It’s four weeks to the Moir and no doubt he’s going to be mighty hard to beat there and hopefully we pick up a slot soon.”

McEvoy was impressed by Redzel’s attitude, determination and sheer speed.

“Peter and Paul said he’s fast, use that first furlong to get control of the race and just build it up from there. He’s arguably improved heading into this preparation,’’ McEvoy said. “He deserves a spot in the (Everest) field. Everything is pointing towards a great preparation.’’