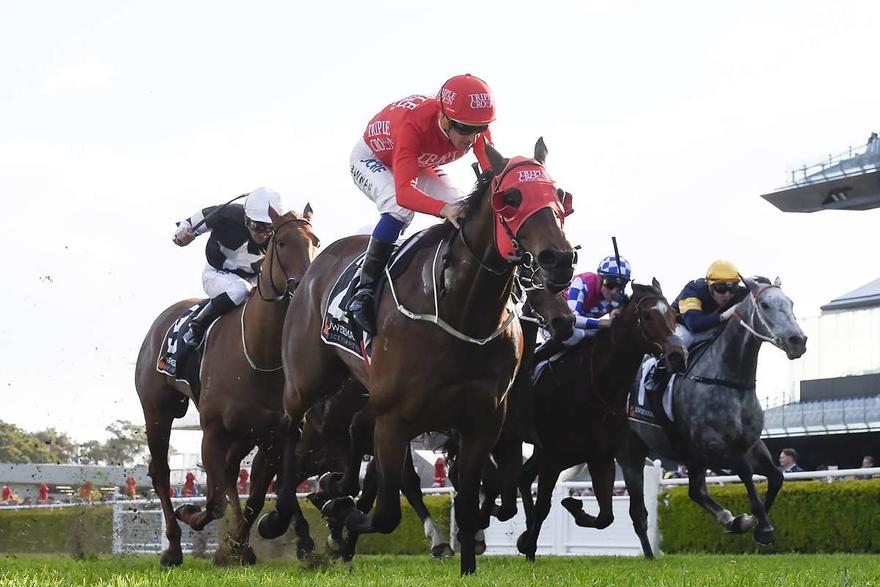 Redzel smashed the track record, English and Fell Swoop were just behind the placegetters, Takedown was competitive and Chautauqua ran seventh but his run was a beauty.

This was the result of the “mini-Everest’ at Royal Randwick on Saturday, the Group 2 $200,000 The Shorts (1100m) where all the top sprinters came through with their reputations intact.

Team Snowden’s Redzel, only confirmed as a starter in the $10 million The Everest a few days earlier, showed why he is a very real chance of winning the world’s richest race on turf with another brilliant display of sustained speed.

“Redzel has come a long way,’’ trainer Peter Snowden said. “ He has learned how to race properly. He is very, very genuine. He never makes a mistake. He races on pace, on wet tracks, dry tracks, carries weight well, he’s just the real deal now.”

Snowden confirmed Redzel ($2.50 favourite) will go straight into The Everest on October 14 without another run after the gelding sped over the Randwick 1100m in track record time of 1m 01.83s to win The Shorts by one-and-a-quarter lengths.

For the third successive year, early leader Ball Of Muscle ($10) had to settle for second while Nieta ($21) ran very well for third, a short neck away.

“In my opinion he is a genuine Everest hopeful this horse,’’ Bowman said of Redzel. “They have worked out exactly how he likes to race, he can set a good pace as you saw today and he can sustain a fight.

“I believe Kerrin McEvoy will take the ride in the Everest and he will be a genuine winning hope. He is a fit horse, has residual fitness from Brisbane and is the most improved sprinter in the country. He won’t run further than 1200m but he is a Group 1 winner at the distance and I would love to be on him in the Everest if Kerrin is not available.”

Snowden had initially wanted to send Redzel to Melbourne for the Group 1 Moir Stakes on Friday week but has abandoned those plans to concentrate on The Everest.

“We changed tack when we got the whisper we were going to get an Everest slot,’’ Snowden said. “He is very effective off a month, three week to a month break. That is just perfect for this horse to race at his best.”

The Shorts minor placegetters aren’t in The Everest mix but English (fourth), Fell Swoop (sixth) and Chautauqua (seventh) all finished in a bunch within two lengths of the winner. Champion sprinter Chautauqua was three lengths behind the second last horse for most of the race and still a clear last at the 400m but he started to lengthen stride and was closing fast in the final 50m. Chautauqua’s effort was eye-catching and he retains Everest favouritism at $5 with Redzel firming from $8 to $6.