Redzel Takes Out The Everest 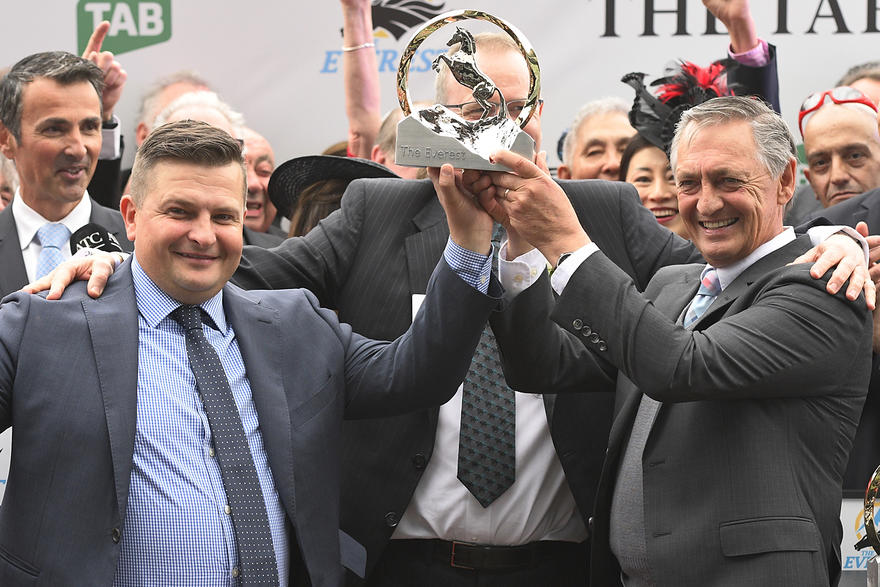 The Snowden Racing-trained Redzel won the world's richest turf race, the $10 million The TAB Everest (1200m) before more than 33,512 race fans at Royal Randwick on Saturday.

Redzel gave his rivals few excuses. He went forward and settled outside the leader Houtzen in a fast run race — the 1200m was run in 1m 8.36s — and kept going, holding on for a famous win to lay claim as the unofficial world champion sprinter.

The Snowden’s have won so many of the nation’s biggest races including two Golden Slippers but The Everest took both men to a different place in racing’s stratosphere.

“This is the best by far our best result,’’ Peter Snowden said.

“Our first Golden Slipper was exceptional, I didn’t think I’d ever get that feeling again but today is well past it.”

Snowden embraced his son and understandably both men were reduced to tears.

“I can’t even talk,’’ Paul Snowden said. “It’s a massive thing for the stable.’’

Redzel ($8.50) forged to the front soon after turning for home, dashing two lengths clear and held off favourite Vega Magic ($4.80) to win by nearly a length with Brave Smash ($19) a short neck away third.

Redzel’s win was his fifth in succession and took his career earnings to nearly $7.2 million — an incredible return on the $120,000 Triple Crown syndicators Michael and Chris Ward went to secure the horse at the 2014 Magic Millions Gold Coast Yearling Sales.

The brothers then syndicated Redzel to a group of everyday Australians including police officers, school teachers, a doctor, taxi driver, concreter, electrician, pharmacist, a former NSW Sheffield Shield-winning coach, and a security guard.

“This is such a result for the owners,’’ Snowden said.

“They are a terrific bunch of guys, there’s a lot of stories behind all the owners, there’s a couple of sad ones as well, but if they’re feeling anything like me they’ll be better 10 times over.”

“I am on cloud nine — and I don’t think I will come down until next year’s Everest,’’ Ward said. “When the race was announced back in February, I spoke with Chris and we wanted to be a part of it but we weren’t sure if Redzel could get there.

“But he has improved so much over the last few months, Peter and Paul set him for this race, it is well documented they are ‘grand final’ winning’ trainers and it was a great ride by Kerrin McEvoy.’’

Snowden also made mention of McEvoy’s ride, the champion jockey rating the gelding perfectly in front and timing his finishing run to perfection.

“What a race to win, it is so exciting. It’s such a thrill to be part of it, such a huge buzz,’’ McEvoy said.

“My wife, Cathy, is here and hopefully my kids are yelling at the TV screen at home.

“The race couldn’t have worked out any better in the run, we had a dream run outside of the leader. I am over the moon.”

“When we realised we didn’t have a sprinter for The Everest, we started looking closely at the other runners and we kept coming back to Redzel.

“Peter and Paul Snowden have had this horse in such good form and we felt he would be very hard to beat in this race. It is such a thrill to win The Everest — I’ve experienced nothing like this in my time in racing.’’

The final word to an exuberant co-owner Peter Piras. “I’ve had to battle leukaemia, kidney disease, and other complications. Even today, before this race, I was in so much pain — I’m not in any pain now. Thank you Doctor Redzel!

“Words can’t describe how much this horse means to me. Truthfully I’m lucky to be here today — but I just knew Redzel could do it.’’