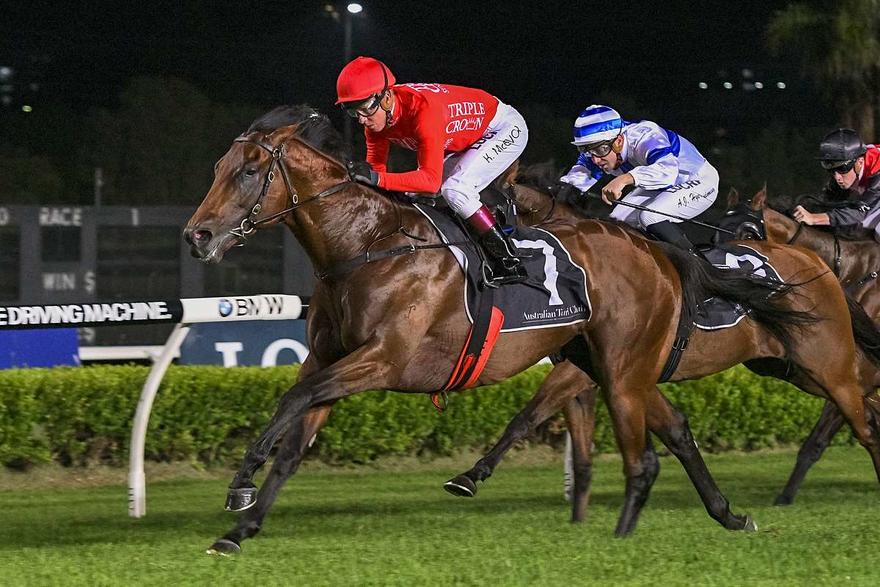 An eye-catching performance from Triple Crown’s Brave Song lit up Canterbury’s evening meeting on Friday [December 15], as he flew over the top to win the $40,000 BenchMark 73 Handicap over 1250m.

Taking on the older horses, three-year-old Brave Song looked in a perilous position when he was shuffled back to second last on the rail entering the bend, but a cool Kerrin McEvoy had confidence in his mount, and delivered the son of Your Song with a surging run on the outside to get up comfortably by one and a quarter lengths over Pianissimo.

The win – his second at Canterbury – displayed further indication of the high regard in which Brave Song is held, and demonstrated that greater tasks lie ahead for the $67,500 Inglis Classic purchase.

“I was a bit worried!” admitted Kerrin McEvoy.

“He did it so nicely. I got him three-wide and I was wondering when to push the go button. I was worried for five or six strides but this guy has got the motor.

“He’s only going to improve off that and he’ll come on nicely. That was a lovely starting point and he did it well.”

Co-trainer Paul Snowden issued a warning that more is to come from Brave Song. “It didn’t really go to plan during the race,” said Snowden.

“But the horse was good enough to win. He’s won extremely well.

“Tonight will definitely bring him on as he’s only running at about 75% fitness right now, but it was a good day out and a nice soft win for him.”