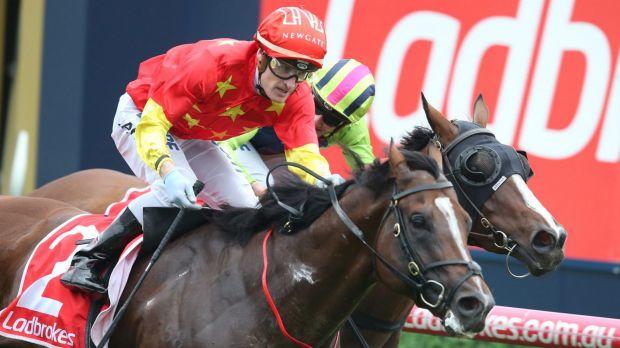 Jockey Mark Zahra and the father-and-son training team of Peter and Paul Snowden have finally combined to win a Group 1 race.

While the Snowden’s and Zahra are no strangers to winning at the highest level, Russian Revolution's win on Saturday in the Oakleigh Plate at Caulfield was their first together.

Sent off the $4.60 favourite and after racing wide, Russian Revolution dug in the final 300m to defeat Snitty Kitty by a half-neck, with Hellbent a short half-head away third.

Beginning in 2008, the Snowden’s ran a two-state stable in Sydney and Melbourne when training for Darley Stud, which later became known as Godolphin in 2014.

Zahra was the Snowden’s main rider in Melbourne, but would often be replaced by Darley's retained jockey Kerrin McEvoy when the big Group 1 races came around.

"It's terrific to get a Group 1 with Mark," Paul Snowden said.

"He was a part of my career down here for a little while through the Darley years but with Kerrin (McEvoy), he got replaced quite a lot of time when he could have been winning Group 1’s in his own right."

Russian Revolution is now a dual Group 1 winner at 1100m, having taken out last year's Galaxy at Rosehill.

Snowden is hopeful connections will delay the four-year-old's stud career further and allow him to race on.

"He was there to get knocked off today with the work he did early and mid-race, but the fact is he stuck it out.

"We'll have a meeting in the next few days. "There's the William Reid (at Moonee Valley) down here or we could send him up north.

"He's not a one-hit wonder and there's certainly races around for him."

Zahra said Russian Revolution had to dig deep to win after being forced to race wide without cover.

"It was a dog fight over the last 100 metres between me and Bons Away and Snitty Kitty and Hellbent and luckily we were just too strong," Zahra said.

"It's real pleasing to win for them.

"It's really pleasing that someone that's supported you throughout your career, you can win a Group 1 with them."