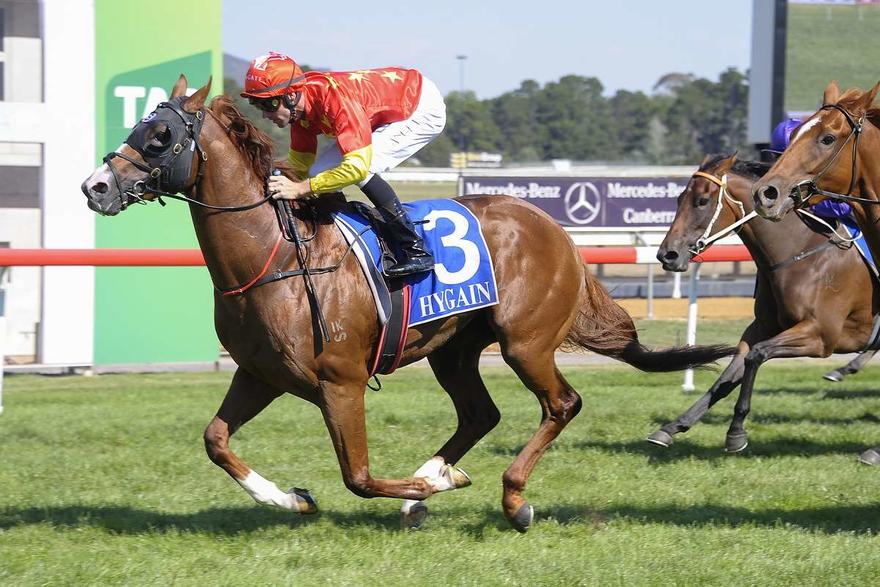 Assimilate returned impressively to the winners circle in the $130,000 XXXX Gold Listed Canberra Guineas (1400m) on March 11, as he edges towards a tilt at the Sydney Autumn Carnival.

In typical fashion, the talented three-year-old colt sat towards the rear of the field under the blessing of a hot tempo which saw him positioned near last approaching the home turn. Jockey Tye Angland then encouraged the son of Sebring to chase down rivals and let down with a barnstorming finish, holding off Primitivo by almost a length.

The application of blinkers and a fast run race made all the difference according to both co-trainer and Tye Angland.

“He is a naturally gifted galloper, but with his type of racing pattern, he does need a genuine pace set and that’s what we got today. The addition of blinkers really helped him focus too and let down beautifully,” explained Paul Snowden.

“We’ve always had a lot of time for this horse and while races are hard to win at any level, we’re not at all surprised with his victory today.”

Angland added: “We didn’t draw the best but the tempo of the race allowed me find a position where he was comfortable.

“First time he’s had the blinkers on so I’m pretty glad they rolled that way. He usually gets his head a little bit high and doesn’t know how to flatten out properly but these blinkers have really done the trick.

“To his credit once I got him to the outside he finished off - give classy horses some room and they can go through their gears.”

The $200,000 Group 3 Carbine Club Stakes (1600m) on Day 1 of The Championships at Randwick (April 7) is one race option being considered during the Sydney Autumn Canrival.

Tim Clark pushed the son of Uncle Mo to the front from the wide barrier (10) and led the pack from go to whoa to record a second career win from five starts, beating I Am Kilani.