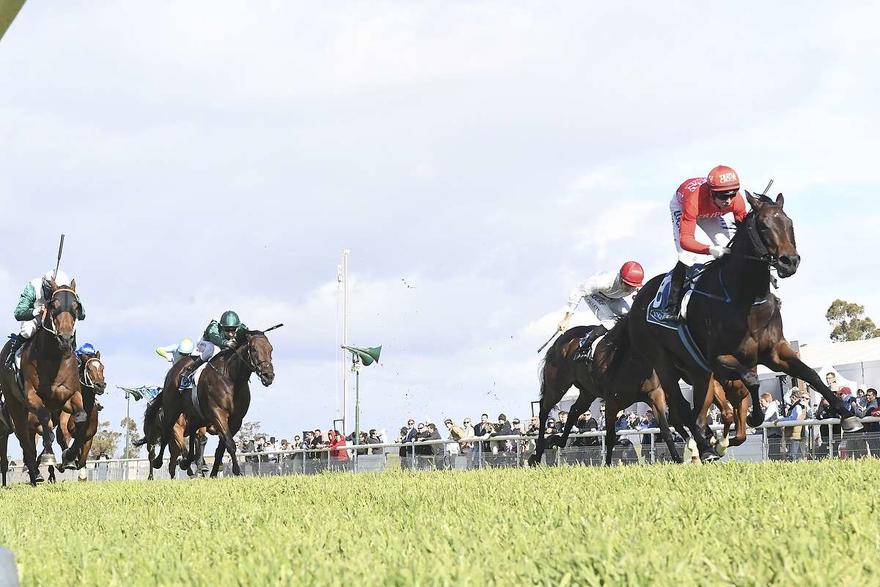 “He is a bloody genius,’’ said Bailey, Channel 10’s weather presenter. “The forecast is fine, fast and fabulous — Moss Trip and Peter Snowden!”

Bailey’s enthusiasm was understandable as Moss Trip was simply electrifying in the $400,000 Inglis Guineas (1400m) at Scone on Saturday.

Moss Trip, the most improved three-year-old filly in training, settled back at the rear of the field before jockey Brenton Avdulla unleashed her wide out from the 300m and she sprinted straight past a quality field.

Snowden admitted he was concerned when he saw how far back Moss Trip was in the early stages.

“It wasn’t our intention to get that far back — it was bad for my heart,’’ Snowden said. “But Brenton always seemed to have a lapful of horse, he looked confident to me.

Moss Trip ($3.60), raced by Michael and Chris Ward’s Triple Crown Syndications of Redzel fame, led home a Snowden stable quinella when she raced away for a brilliant two lengths win from Assimilate ($6.50) with Frolic ($9) a head away third.

Villermont was backed into $2.70 favouritism but he seemed to have every chance before running fifth.

Some good three-year-olds have won the Inglis Guineas since it was introduced at the Scone stand-alone including Sincero (2011), Cosmic Endeavour (2014) and Serene Majesty (2016) but Moss Trip could prove the best-ever winner of the race.

Moss Trip’s rise has been meteoric.

She started her campaign in restricted class at the provincials but she has now won the Group 3 Carr Stakes, the restricted Listed Inglis Guineas and was competitive at Group 1 level when fifth to Shoals in the Surround Stakes.

“She has just come into her own,’’ Snowden said. “Physically she has got stronger, mentally she can still be a little ‘tardy’ but my staff at home do a great job with her and she is in a really good place.

Moss Trip improved her record to five wins (three placings) from 10 starts, taking her prizemoney to over $400,000 — with the promise of more to come.

“She just keeps getting better and better,’’ Avdulla said.

“They went along at a really good gallop and I was following Tye (Angland, rider of Assimilate) as I knew he would take me into the race. I gave them a fair start on the corner but I was always comfortably they were going to come back to me.

“When I let her slide she put pay to them pretty quickly. It is very windy out there so cover is a big thing but she is a very talented filly. It was a great win, really.’’

Snowden said Moss Trip has now earned herself a shot at a Brisbane winter carnival campaign with the Group 1 Tatt’s Tiara her likely target next month.