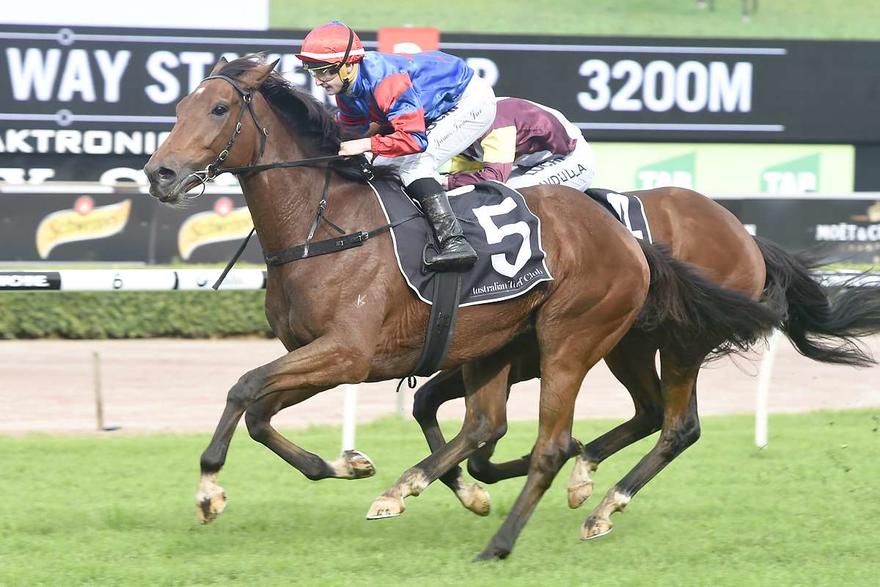 Keeping his 3200-metre record at a perfect three for three following his win in Saturday's $150,000 Group 3 Queen's Cup (Queensland Cup) at the Sunshine Coast, Plot Twist (IRE) continues to whittle down his €200,000 purchase price as a three-year-old in Ireland.

The winner of the last two runnings of the Stayer's Cup over the same distance at Randwick, the six-year-old son of Champs Elysees displayed his superior staying ability under Jim Byrne by defeating Anton En Avant (Dubawi) by one and a half-lengths with the favourite Megablast (Shinko King) a length and a quarter back in third.

Trained by Peter and Paul Snowden for owners Greg and Donna Kolivos, Plot Twist (IRE) advances his record to 6 wins and 1 third from 23 starts with earnings of $279,015.

"We decided to lead if we could," Snowden told AAP.

"He hasn't got the turn of foot or class to run in a Melbourne Cup but a race like the Adelaide Cup might suit him.

After winning a mile and a quarter maiden at The Curragh when on debut back in August 2015, Plot Twist was in the sales ring two weeks later in the Goffs Champions Sale at Leopardstown where Hubie de Burgh had the last say at €200,000, the second top lot of the sale.

He is the best of four winners from five to race out of the unraced Kalanisi mare Bryanstown Girl whose dam Stilleta (Dancing Brave) is a sister to Epsom Derby and Irish Derby hero Commander in Chief and a half-sister to dual Group 1 winner and successful stallion Warning, Grade 1 winner Yashmak and Group 2 winner Dushyantor.

Plot Twist becomes the 20th stakes-winner for the Danehill stallion Champs Elysees, a triple Group 1 winning brother to Group 1 sires Dansili and Cacique as well as the champion Banks Hill and Intercontinental.