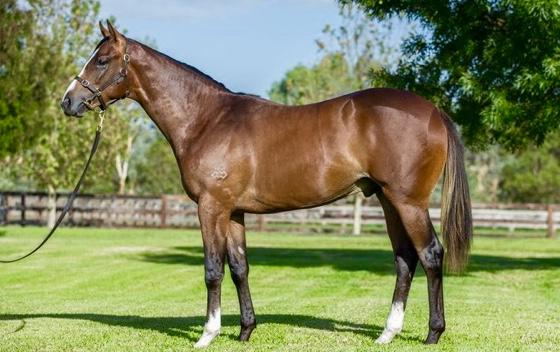 Team Snowden struck gold with promising Snitzel colt Lion's Head (pictured here as a yearling) who improved on his debut second at Newcastle two weeks ago to score a short neck win over 1200 metres as favourite.

As reported by Breednet.com.au, he settled back in the field and raced greenly up the straight for Winona Costin, but did his best work late to snatch a determined win.

Carrying the colours of China Horse Club, Lion's Head was a $1million Inglis Easter purchase from the Arrowfield draft and runs for a partnership that also includes WinStar Farm.

He is the second winner from US stakes-winner Tara From the Cape (USA), a half-sister to Group 3 winner Royal Mo.

Peter Snowden was impressed with the result, adding that blinkers may need to be applied soon.

“He’s a lovely colt who’s well bred, so it’s good to see him get off the mark today and win at just his second start.

“He does seem to switch off mid-race though, so blinkers may need to be applied in the near future.”

Later in the day at Newcastle, Star Witness colt Navigator broke his maiden status over 1400m in terrific fashion with Christian Reith aboard, for the James Harron Bloodstock Colts Syndicate.