HOW MCEVOY PLANNED HIS RIDE TO THE PEAK 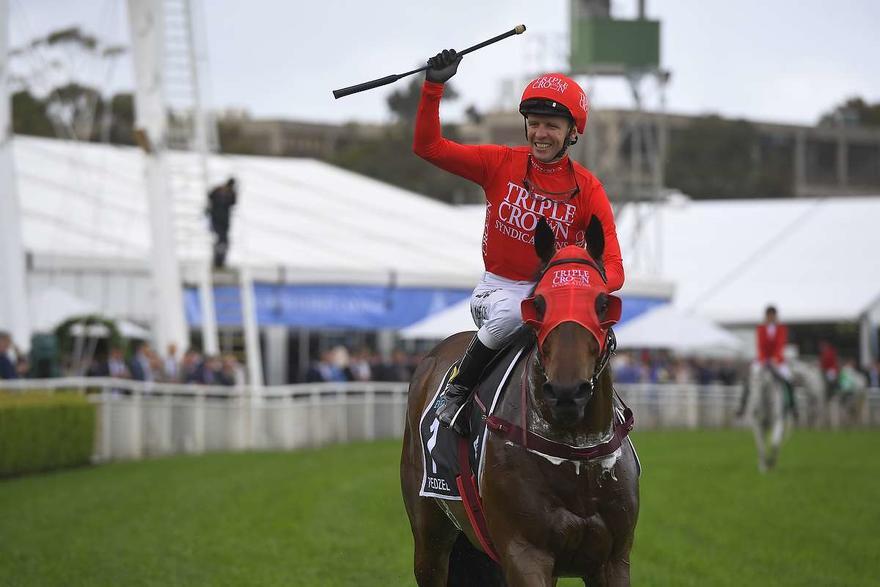 Kerrin McEvoy remains the only jockey to enjoy the euphoric Everest-winning feeling.

The champion rider combined with Redzel to win the world’s richest turf race for the second successive year with another dominant sprinting display at Royal Randwick Saturday.

McEvoy revealed he approached the $13 million race with an open mind about his race tactics.

“Last year we had a bunny, this year there were a few scenarios going through Peter and Paul’s heads and mine as to how it might unfold,’’ McEvoy said.

“I thought Ryan Moore’s horse (US Navy Flag) might be a bit of a pest early, maybe Hayes’ horse (Vega Magic) with the blinkers on if he got a bit keen.

“From the 1 gate, that was Plan A, to control it from the front. That’s what this horse is able to do. He loved the ground and is such a little warrior. He is a joy to be a part of.”

McEvoy was able to dictate terms in front on Redzel, controlling the race tempo and then comfortably holding his rivals at bay in the sprint to the finish.

“Redzel is quite reserved other than raceday, he saves himself and all he wants to do is gallop and gallop hard. He is a little gem, he is my little gem,’’ McEvoy said.

“I was really happy there was a bit of rain around and he did the rest. It is a huge buzz to win it again, unbelievable.”

“This is euphoria at its best. It is such an electric feeling.’’

Redzel has proved himself the nation’s best sprinter. He is equally effective on all track surfaces, he can lead or sit just off the tempo and he is brave under pressure.

His second Everest is probably an even superior effort to last year’s win as the six-year-old gelding had to overcome a setback in training.

Co-trainer Paul Snowden said the setback Redzel had mid-Everest preparation was not ideal but both he and his father remained confident they could get their sprinter right for the big race.

“A lot of people wrote him off just the same but it’s all about knowing your horse,’’ Paul Snowden said.

“You never give up. Just try and do your best to keep going. We got it right. It’s great for the staff, great for everyone.”