Golden Slipper favourite Cosmic Fore has timing and barrier on side 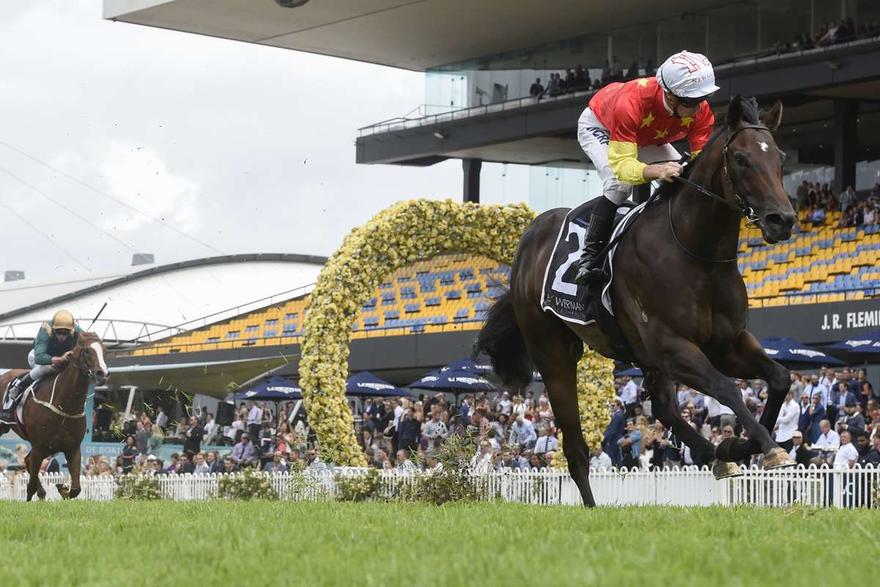 Peter Snowden always believed Cosmic Force was Golden Slipper material and after Tuesday’s barrier draw punters agree the colt has the sense of timing to take racing's biggest prize for two-year-olds at Rosehill on Saturday.

The son of Deep Field has gone from a $51 outsider needing to win last Saturday to even make the Golden Slipper to the $5 favourite after drawing barrier two.

“I can’t remember a horse that has firmed like Cosmic Force has in last seven days of Golden Slipper betting,” TAB’s Glenn Munsie said.

“When they were going into the barriers for the Pago Pago last weekend he was $51 and was just another horse with a Slipper nomination.

“A couple of minutes later it was $8 and after drawing gate two he is Golden Slipper favourite, which is amazing.”

Cosmic Force sat three-wide and demolished his rivals by 7¼ lengths in the Pago Pago Stakes, eased down by James McDonald on the line to gain a run.

“I don’t know if I’m on the right horse anymore,” said McDonald, who was booked to ride second-favourite for Godolphin, the unbeaten Tenley, which drew barrier six before the Pago Pago. “That horse gave me an unbelievable feel.”

Munsie said the wet weather will play a role in what starts favourite for the Golden Slipper but it's hard for punters to go past the most recent performance they have seen.

“It was not a surprise if you had listened to the confidence of Peter Snowden but you have to put it on the track and Cosmic Force did that last Saturday,” he said.

“There hasn’t been a performance like that seven days out from the Slipper. It was two-fold: one the ease of victory; the other was it was done on a wet track, which encourages punters more because that is what he's going to get in the Slipper.”

Snowden, with his son Paul, will saddle three Golden Slipper runners with Anaheed, which is the likely leader from gate seven, and Catch Me also in the line-up.

However, he reiterated that he had been delighted with Cosmic Force since his massive win on Saturday. It came after the colt had been an unlucky second in the Lonhro Plate on a heavy track to Bivouac and a solid runner-up behind Microphone in the Skyline Stakes.

“He has just been eating well, working well and getting stronger. He has been learning with each run and he had got there at the right time," Snowden said.

“Looking at him [on Tuesday] morning you wouldn’t know he had a run on Saturday and he is still improving.

“When they win by that far it is ability and the ability to handle the conditions, which is going to be important going into the Golden Slipper.”

Snowden believes the barrier will give Mark Zahra, who takes over on Cosmic Force, the chance to get him to relax him and produce his best performance on grand final day.

“The barrier gives us a good opportunity to ride him in just behind them, rather than make something happen,” he said. “We haven’t been able to do that with yet.”

Cosmic Force will have to turn back a tide of Godolphin blue, which has six in the final field and first emergency Bivouac.

It was a mixed bag at the draw for the boys in blue with colt Microphone drawing rails, unbeaten fillies Pin Sec, an easy Black Opal winner last time, and Tenley in five and six respectively.

Then Blue Diamond winner Lyre, from the Anthony Freedman yard, came up with gate 13, which has never had a winner jump from it, Kiamichi 17 and Magic Millions winner Exhilarates 18.

"After the draw, I would want to be on Microphone," Godolphin spokesman and hall of fame jockey Darren Beadman said.

"He hasn't done anything wrong and the form looks pretty good because he beat Cosmic Force at his last start in the Skyline. He should get the perfect run from the gate."

Emerging breeding powerhouse Aquis will have its colours on Free Of Debt, Dubious and Vincere Volare in a Golden Slipper dominated by the studs.

Gary Portelli and Darby racing are confident that the wet conditions will suit Time To Reign, like they did his half-sister She Will Reign a couple of years ago.

"We know he handles the wet track and loves Rosehill, he has won there three times," Portelli said. "We have good memories from a wet day with She Will Reign.

"The barrier of nine is in the middle where I wanted to be, and we will be letting him run because that's how he races best."