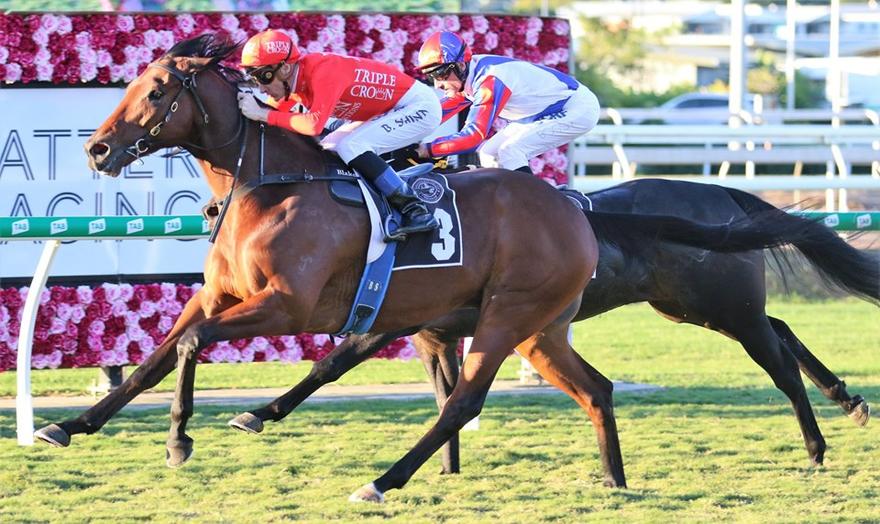 The Triple Crown colours were carried to victory at Eagle Farm on Saturday by talented Your Song gelding Brave Song, who ended a frustrating run of three consecutive second placing in stakes races with a well-deserved victory in the Group III BRC WJ Healy Stakes.

Brave Song has been a two time SW this season for Your Song.

The Peter and Paul Snowden trained four year-old was a stakes-winner at Caulfield last spring and has been super consistent since then, albeit without winning.

Ridden quietly by Blake Shinn, he settled down at the rear of the field and charged to the line to win the 1200 metre sprint by a long neck as favourite.

"He's a very talented horse and put the writing on the wall this prep with runs behind Trekking and he deserved that win today," Shinn said.

"He got a lot of crowding from outside runners early and I ended up further back than I would've liked but I had confidence in his sprint so I let him relax and the gaps came when I needed.

"It was a sensational win."

A $67,500 Inglis Classic purchase from the Yarraman Park draft, Brave Song has won six of 18 starts earning over $530,000 in prizemoney and will be winning plenty more of these types of races.

Brave Song as a yearling

Bred and offered for sale by Yarraman Park, Brave Song is the best of four winners from Brave Choice, a sibling to Group II winner Brave Prince and stakes-winner Valourina, the dam of Group winners Media, Timbourina.

Brave Song was sold by Yarraman Park in 2017 at the Inglis Australian Broodmare Sale for just $8,000 and looks to have been a bargain buy as her current yearling, a filly by Super One, was sold at the Magic Millions Gold Coast March Yearling Sale for $90,000 by Lyndhurst Stud. She produced a filly by their hot young sire Better Than Ready last spring and is back in foal to him again.

Brave Song is one of three stakes-winners for Widden Stud's Your Song, who is priced at $13,750 this spring.