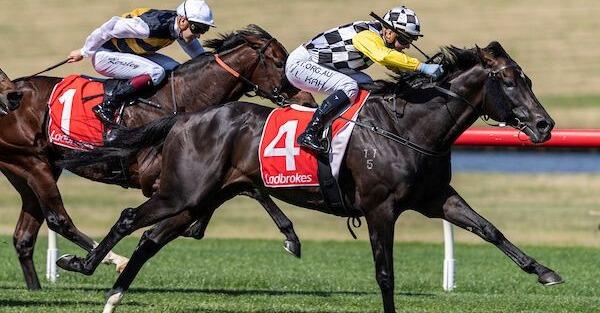 It was with a sense of occasion that Carif (So You Think {NZ}) lifted for his first stakes victory in Saturday's Sandown Cup just hours after his dam Norzita (NZ) (Thorn Park) passed away, and on the day which marked Bart Cummings' 93rd birthday.

Carif was foaled two weeks after the legendary trainer, a winner of 12 Melbourne Cups, passed away in 2015, and while he is trained by Peter and Paul Snowden, the influence of Cummings, who trained both his sire and dam to Group 1 victories, remains strong.

In the famous colours of the late Dato Tan Chin Nam, Carif claimed win number three at start number 28 on Saturday in his first start over a distance which became Cummings' specialty, the 3200 metres.

Hours earlier, Duncan Ramage, the long-time racing and bloodstock manager of Tan Chin Nam's, was informed by Arrowfield Stud, who had purchased Norzita in 2019, that she had to be euthanised.

"I got a call during the morning from John Messara himself to tell me that Norzita had had an accident and unfortunately she couldn't be saved. Carif, perhaps channelling some of that, got up and won his two-mile race," Ramage told TDN AusNZ.

Norzita, purchased by Ramage for Dato Tan Chin Nam and Tunku Ahmad Yahaya for NZ$200,000 at the 2011 New Zealand Bloodstock National Yearling Sale, was Bart Cummings' final Group 1 winner under his own name (he would win later Group 1s in partnership with his grandson James). She won both a Flight S. and a Vinery Stud S. as a 3-year-old and was also twice placed at Group 1 level.

"She's won a stakes race at The Valley over six furlongs to the Flight and the Vinery. She also ran third to Sacred Falls and Pierro in the Doncaster. Both of those horses have become influential stallions themselves. That was a terrific effort to match it with those premier colts," Ramage said.

"It was a logical choice for the owners to support So You Think in his formative years and they did that with their best mare. The idea was to race Carif and see how good he could become."

With Dato Tan Chin Nam's interests in Australia being wound back, Norzita was offered through the 2019 Inglis Chairman's Sale in foal to Snitzel, where she was purchased by Freyer Bloodstock on behalf of Arrowfield for $1.7 million

A year earlier, her Fastnet Rock colt, to be named Confidant, was sold through the Inglis Easter Yearling Sale for $600,000. In training with Lindsay Park, he has won once in five starts.

Meanwhile, a 3-year-old filly sister to Carif, named Nor Izzati, has been retained to race.

"She is in pre-training at the moment at Hannover Lodge and she is due to make her appearance at the stables at Anthony Cummings in the coming weeks. We have taken our time with her.

"Carif took his time, and he's five and we have learned from that and we won't do much with her until she is well into her 3-year old career."

Norzita foaled fillies by Snitzel and The Autumn Sun at Arrowfield before her untimely death on Saturday.

The late Norzita when purchased by Freyer Bloodstock for $1.7 million on behalf of Arrowfield

As for Carif, having proven capable at the 3200 metres, there is one real target for him in 2021, and that's the race which has witnessed his colours win on four previous occasions and the race in which his own sire ran a brave third in 2010.

"He's got multiple stakes placings over a mile and half and slightly further, and I think if you watch the Hotham, he was unlucky not to have won that," Ramage said.

"He drew too well and got held up on the fence for too long. Willie Pike was adamant that if he'd been able to get clear he would have won the race and would have been in the Melbourne Cup instead. We take little steps and maybe he might get into the Melbourne Cup next year."