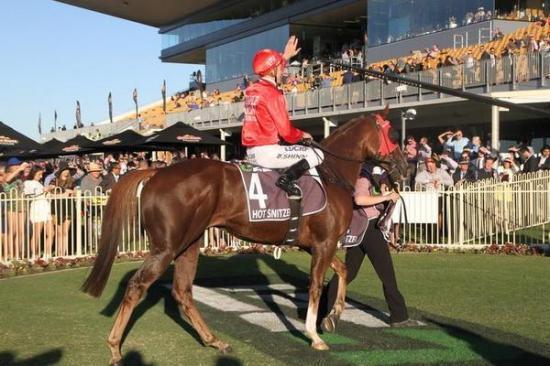 It’s not often a horse will live up to their name but that’s exactly what Hot Snitzel has done for his legion of Triple Crown owners and racing fans. With eight career wins, six seconds and three thirds, this Group 1 warrior has been consistently very good for a long period of time; and his $1.3 million in career prizemoney probably says it all.

Being a seven-year-old, we’ll have to be selective with where we run him but he’s still ‘got it’, as most recently evidenced in the tab.com.au stakes race at Flemington on Victoria Derby Day (October 31) where despite finishing a close second, beat subsequent Group 1 VRC Darley Classic winner Delectation.

Hot Snitzel will be aimed for back to back glory in the BTC Cup (1200m) on Saturday 7 May across the 2016 Brisbane Carnival. We know he races best fresh and appreciates a bit of give in the ground, so hopefully we’ll be seeing more of this gallant speedster from early March 2016 onwards.