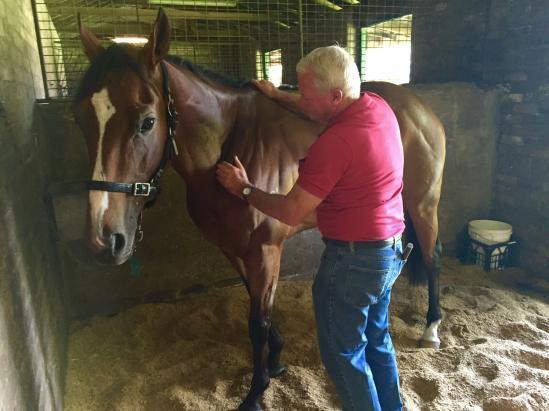 Gifted horseman Kenny Butler has spent his whole life working with thoroughbreds, from apprentice jockey through to breaking in, pre-training and training, but it wasn’t until he met fellow racehorse trainer Graeme Boyd that his career took a turn towards the equine chiropractic field.

Boyd, renown for providing horses with excellent chiropractic treatment in the 80’s (he also spent time in the USA teaching them what not to do in the field), provided Kenny with a chiropractic apprenticeship - old school style, and thirty successful years later, he’s then pupil is still as busy as ever treating some of the country’s best horses.

With the help of his two sons Justin and Matthew, Kenny will treat up to 120 horses per week Australia-wide, covering both the racing and equestrian industries; while approximately 30 Snowden Racing horses will each receive one visit per week, which can range from anywhere between five to thirty minutes per horse depending on what’s required.

“My job involves straightening up of the bones which then takes pressure off the pressure points, so I’ll focus on the neck, shoulders, chest, girth, back, hindquarters, rump and legs,” explained Kenny.

“Basically every part of the body gets a look over and those who require ongoing treatment will be visited once a week give or take.

“That way you’re on top of things by taking preventative measures and can eliminate most issues early.”

Peter Snowden and Kenny have known each other for more than 30 years, which has naturally seen them work as a team on some big name racehorses including Pride of Dubai, Shooting To Win, Miracles of Life and Lonhro, but there’s one stand out athlete which Kenny recalls.

“Week of the 1995 Cox Plate John Hawkes rang me on the Monday as Octagonal was sore, so I flew to Melbourne and worked on him that same night, then again on the Tuesday and Thursday.

“He came out and won the Cox Plate on the Saturday and I took immense satisfaction in that win; he was a real champion.”

Peter Snowden believes Octagonal would not have won the Cox Plate without the healing hands of Kenny.

"I honestly don't think Octagonal would have won the Cox Plate had Kenny not worked on him around the clock that week - which only demonstrates the importance of a trainer taking a holistic approach to the management of each individual horse.

Snowden added, “If horses are sore they can’t stretch out, so if you can take the soreness out through chiropractic treatment it’s invaluable.

“Needless to say, Kenny is an important part of the team.”