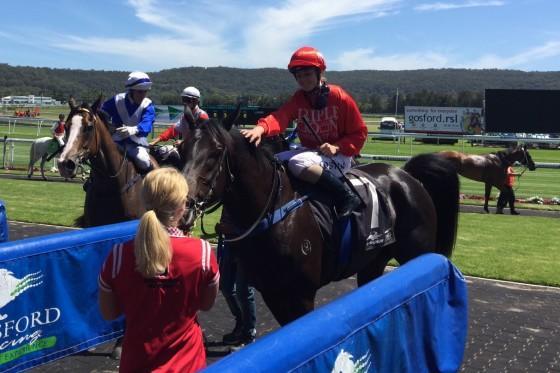 The last day of 2015 provided Snowden Racing and apprentice rider Winona Costin with a third win in just three days thanks to the Triple Crown-owned Flash of Innocence.

In similar vein to Yulong Ambition a day earlier, the promising daughter of Lonhro out of Group 2 winning mare Truly Wicked, flashed home late in the Great 4 Gosford Maiden Plate (1100m) to snare an impressive victory on the line, providing Snowden Racing with its 51st win for the 2015-2016 season.

With four trials under her belt, the well-educated filly timed her run to perfection to outperform Women in Love and Fly Forward by the shortest of margins on debut.

“I honestly didn’t think she wouldn’t get there in time so it was a terrific result in the end, even if it was by a whisker!

“It’s great to see her find the line like that with such determination, and especially for the Triple Crown ownership group who we’ve experienced fantastic success with to date,” explained Peter Snowden.

A $210,000 Inglis Premier purchase from the Blue Gum Farm draft for Triple Crown, Flash of Innocence is a half-sister to the highly credentialed Hong Kong-based sprinter Amber Sky, winner of the 2014 Group I Al Quoz Sprint in Dubai.

Lonhro, a horse who has provided the Snowden family with many fond racing memories, had three winners on the last day of the year and is starting to charge up Australia’s Leading Sires by winners list.

“Both Lonhro and his father (Octagonal) were champion racehorses who provided some very special racing moments while I was assistant trainer to John Hawkes, so it’s a pleasure to train progeny from the family line,” explained Snowden.

“I’m really looking forward to seeing how far we can take this lovely filly for Triple Crown.”