Magic Win For A Magic Horse 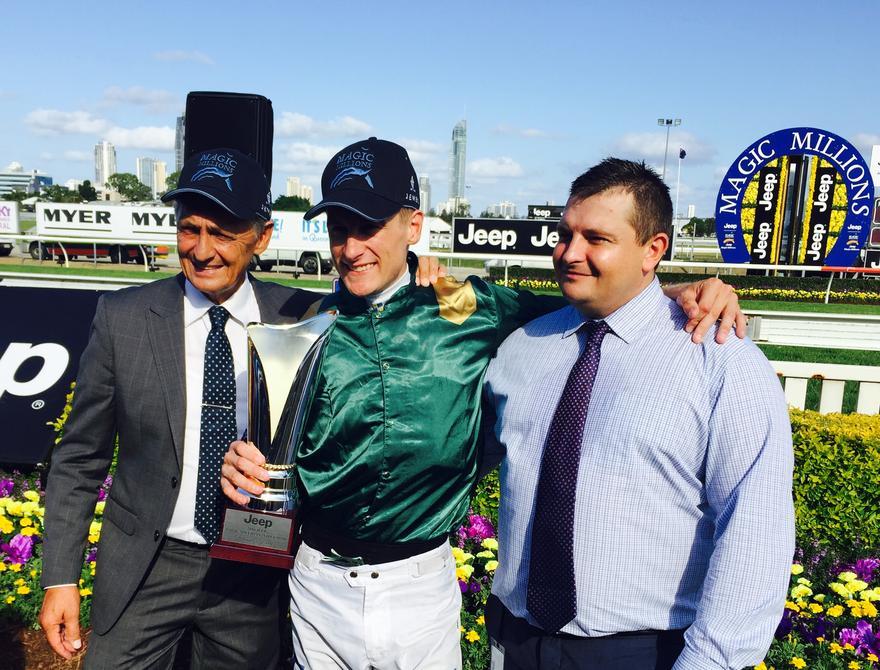 Star colt Capitalist was a class above the rest in the Gold Coast Magic Millions 2YO Classic (1200m), storming to a 2.5 length victory in Queensland's $2 million feature event on January 9.

Capitalist jumped extremely well from barrier two but had to work hard to keep his prominent position from outside horses coming across, however confident riding by Blake Shinn ensured the son of Written Tycoon held his ground before bursting away at the top of the straight to record one of the most dominant performances in Magic Millions history.

The James Harron-purchased colt remains unbeaten on three wins with a combined winning total of over eight lengths, a statistic which doesn’t surprise Peter Snowden.

“That was everything you want to see.

“He showed tremendous gate speed which he hasn’t really been doing because we haven’t had to ask him but he's proven adaptable.

“He’s an exciting horse and very professional - but he’s still leaning and there is much more to come.

“The Golden Slipper is doable

"James Harron has done a wonderful job buying these talented colts to race and he’s got another great one for connections to have some fun with,” said Snowden.

Shinn, who again proved why he is one of Australia’s best riders, was in awe of Capitalist after the win declaring him as the most natural two-year-old he’s partnered.

“I’ve always had so much faith in this horse. I knew he had lengths on the opposition; it was just a matter of keeping him out of trouble.

“Once I was able to move off the rail I was supremely confident but he worked from start to finish which I hadn’t really asked him to do before and that’s a really good sign going forward.

“I can ride him anyway I like, and that’s what’s good about him from a jockey;s perspective because he will work with you.

“He’s the most natural two-year-old I’ve ridden and is starting to build a great record. He will prove to be one of the best two-year-olds in the modern era,” enthused Shinn.

“It’s great for Peter and Paul Snowden to win this race for the first time and for James Harron and his team of owners who put their neck on the line when buying these horses.

“It’s just a great feeling to get such a big result in such a short time.”

The win also capped off a double for Shinn and Team Snowden who took out the opening race with promising colt Wolf Cry.

Capitalist continues the stable’s spectacular run of success since it began operation in May 2014 with four races valued at $1 million or more and five Group 1 victories to date.